by Sameeksha Rawat
Reading Time: 3 mins read
A A
1 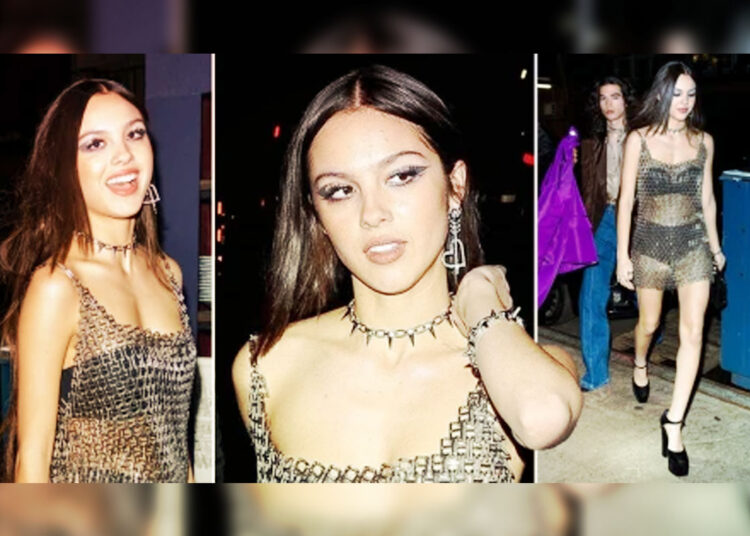 Olivia Rodrigo is taking some real fashion risks, just a few hours before the Met Gala starts. The “Driver’s License” singer stepped out in New York, wearing a completely sheer chain dress. She was seen during her late-night dinner at Carbone restaurant on Sunday night on May 1.

In addition, joining the 19-year-old singer for the evening meal was her BFF Conan Gray for Sunday.

Also, it’s highly expected that on Monday Night, Olivia would be making her attendance at the Met Gala. Back in 2021, we saw the singer making her first-ever appearance at the annual event.

Currently, Olivia is on her singing tour in the U.S. According to reports, she has taken a few days off to make her attendance at the Met Gala. Last Week in Toronto, Avril Lavigne joined her on stage as a special guest!

The 19-year-old pop star was seen showing off her slender figure. Through her transparent chainlink dress that exposed her black bra and underwear.

In addition, she’s currently on the North American leg of her Sour Tour.

She matched her late-night outlook with a pair of chunky black Mary Jane-style platform shoes.

The musicians decided to make her brunette hair blown straight. Although at the center part she was wearing the layered locks.

She opted to accessories the look with a spiky, silver-toned choker necklace alongside a matching bracelet.

Dangling from her ears were heart-shaped earrings. In addition, she had opted to carry a small black handbag.

Rodrigo gave up only a little to the imagination for her fans. With her look and her bandeau-style top and boy shorts underneath the outer layer.

She showcased a leggy display in addition to showing off her visible flat stomach and trim waist being in the short outfit.

The singer opted to have fun with the makeup, going creative with thick, winged gunmetal-colored liner. In addition, to her blushed cheeks and completing it with a bubblegum-hued lip balm.

As she left the hotel, we saw her carrying a royal purple jacket over her arm later.

Olivia was seen sharing the stage with Avril Lavigne last week during her ongoing Sour Your. This was during her performance for one of Avril’s chart-topping tracks.

Previously, Lavigne was spotted while she was sneaking into the back entrance of Toronto’s Massey Hall. On Friday evening, before the Good 4 U singer was officially seen on the stage.

During the show, the Deja Vu singer brought out the Avril onto the stage for her performance of her track Complicated. The track was originally released back in 2002.

The pop singer later also took to Instagram to share a shot of herself. While she was hugging Lavigne during the show.

Rodrigo captioned it ‘Toronto last night was really special. thank u my dearest @avrillavigne for singing along with me. lookup 2 u so much.’