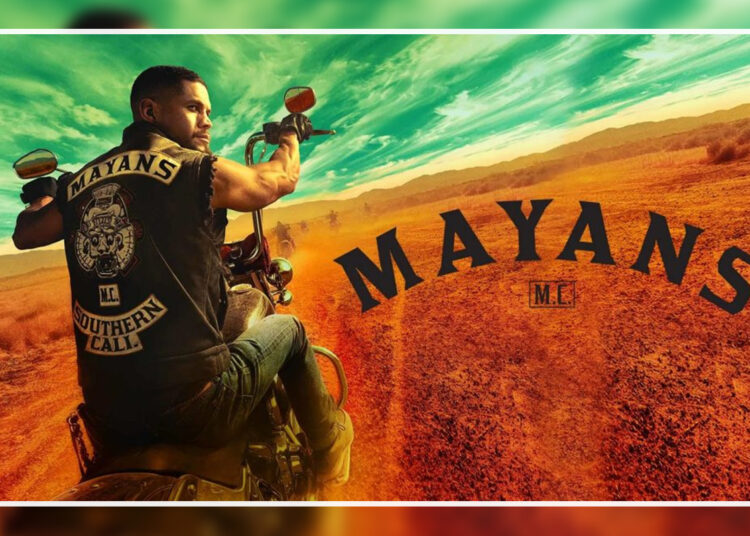 Mayans M.C. Season 4 Update: Kurt Sutter and Elgin James created this American crime series Mayans M.C. which finds itself in the same fictional universe as ‘Sons of Anarchy’. ‘Mayans M.C.’ delves deeper into the rivals-turned-allies of the Sons who are referred to as the Mayans Motorcycle Club.

The plot of the series Mayans M.C. Season 4 is set two and a half years after the setting of ‘Sons of Anarchy’. Most of the events take place in the fictional town of Santo Padre on the California border.

The main focus of the series is Ezekiel Reyes, also referred to as ‘EZ’ who is a prospect of Mayans M.C.’s charter based on the U.S. -Mexico border.

A son of a proud Mexican family, EZ is a gifted man with the American dream. But cartel violence has snuffed his dream out of him leading him to a path of vengeance.

J.D. Pardo plays the role of Ezekiel Reyes in the series. The series was first released on September 4, 2018, on FX. The fourth season of the series premiered on the streaming channel on April 19, 2022.

Now there are some other series which are quite like this one that you can experience if you have already finished season 4 of ‘Mayans M.C.’

Animal Kingdom–
Number of Seasons: 5
Jonathan Lisco developed this American drama series that is based on the Australian same-named movie by David Michod that was released in 2010. The plot focuses on a young boy of seventeen years named Joshua Cody who is also known as “J”. He moves in with his estranged relatives- the Codys after the death of his mother. But the Codys are a criminal family led by the matriarch Janine Cody also known as “Smurf”.

Ellen Barkin and Finn Cole play the roles of Janine and Joshua Cody in the series respectively. The series premiered on June 14, 2016, on TNT.

Mr. Inbetween-
Number of Seasons: 3
Scott Ryan created and Nash Edgerton directed the Australian black comedy-crime series that is set in the suburban area of Sydney. The series revolves around Ray Shoesmith who is struggling with his double life.

He is a hitman for hire. But he tries to balance his criminal activities with his responsibilities as a family man and friend. He is the father of the girl that he has with his ex-wife. He is also Ally’s loving boyfriend.

And he takes care of his brother Bryce who is terminally Iill. Ray fulfills all these responsibilities including the one that he has for his friend Gary despite his criminal life.

Scott Ryan plays the role of the protagonist Ray Shoesmith. The series ran from September 25, 2018, to July 13, 2021, on Fox Showcase in Australia and on FX in the United States.

Queen of the South-
Number of Seasons: 5
M. A. Fortin and Joshua John Miller created this American crime series that is based on a telenovela called ‘Le Reina del Sur’ and the same-named novel written by Spanish author Arturo Pérez-Reverte.

The plot of the series revolves around Teresa Mendoza who has been a poor Mexican woman but built immense wealth through conjuring a large drug empire.

Snowfall-
Number of Seasons: 5
John Singleton, Eric Amadio, and Dave Andron created this American crime series that is set in 1983 in Los Angeles. That was the time of the first crack epidemic.

The series features its effect on the city along with focusing on the lives of several characters including Franklin Saint, a twenty years old drug dealer, Gustavo Zapata, a Mexican luchador, Teddy McDonald, a CIA operative, and Lucia Villanueva, niece of a Mexican crime boss.

Walker-
Number of Seasons: 2
Anna Fricke developed this crime series which is a reboot of the western drama series called ‘Walker, Texas Ranger’ that was released in the 1990s. The plot revolves around Cordell Walker who is a widowed father of two children. Walker carries his own moral code with him.

The series unfolds as he comes back to his home in Austin after two years of staying undercover. But at home, he has to try hard to reconnect with his son who is creative and thoughtful, his teenage daughter who is rebellious, and his ADA brother who was in charge of the family at the time of his absence.

Jared Padalecki plays the role of the Ranger Cordell Walker in the series. Other cast members of the series include Lindsey Morgan, Genevieve Padalecki, Keegan Allen, Odette Annable, Violet Brinson, etc. The series premiered on January 21, 2021, on The CW.