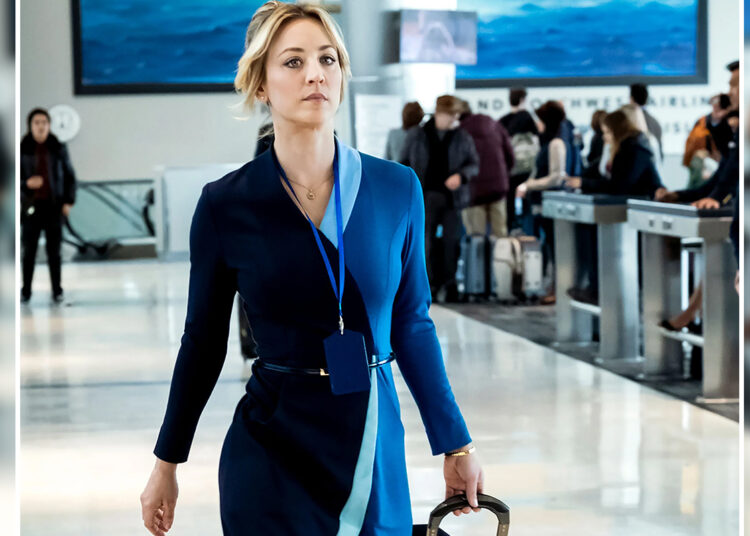 The Flight Attendant Season 2 Update: Based on the same-named novel written by Chris Bohjalian, Steve Yockey developed the American black comedy thriller ‘The Flight Attendant’. The plot revolves around Cassie Bowden, an American flight attendant who is a reckless alcoholic and even drinks while serving on the plane.

She has a habit of having sex with strangers including passengers also. In such an incident in Bangkok, when she wakes up with last night’s hangover, she finds a dead body beside her which happens to be of a passenger of last night. Being unable to recall anything about the murder, she tries to hide the crime but eventually is net by the FBI in New York City.

‘The Big Bang Theory’ famed Kaley Cuoco plays the role of Cassie Bowden in the series. Other cast members include Zosia Mamet, Rosie Perez, T.R. Knight, Michiel Huisman, etc. The series premiered on November 26, 2020, on HBO Max. The second season of the series is set to air on HBO Max on April 21, 2022.

But there are some more series that you might enjoy if you liked ‘The Flight Attendant’ Season one.

Must Watch If You Like: The Flight Attendant Season 2:

The Undoing-
Number of Seasons: 1
Based on the novel ‘You Should Have Known’ written by Jean Hanff in 2014 Susanne Bier directed this American psychological mystery thriller. The series revolves around Grace Fraser. She is a therapist and on the way to publishing her debut novel.

But she makes contact with some unusual revelations which bounds her to make her and her son Henry’s safety the first priority.

Nicole Kidman plays the role of Grace Fraser in the series. Other cast members of the show include Hugh Grant, Noah Jupe, Lily Rabe, Matilda De Angelis, etc. The miniseries ran from October 25 to November 29 of 2020 on HBO.

The Outsider-
Number of Seasons: 1
Based on the same-named novel by Stephen King, Richard Price created this American psychological horror thriller. The series focuses on a suburban parent Terry Maitland being accused of a gruesome murder. But when detective Ralph Anderson takes the case in his hand, he unearths some problematic clues while struggling to come to a solution.

Jason Bateman and Ben Mendelsohn play the roles of Terry Maitland and Ralph Anderson respectively. The series ran from January 12 to March 8 of 2020 on HBO.

Barry-
Number of Seasons: 2
Alec Berg and Bill Hader created this dark comedy series which becomes popular and critically acclaimed. The series revolves around the titular Barry Berkman who is a discharged Marine residing in Cleveland. Barry also works as a hitman.

He feels lonely and dissatisfied with life. But when he goes to Los Angeles in order to kill a target, he instead gets involved with an acting class where he begins to question the path he has taken in life.

All the cast members acted brilliantly in the series and caused to receive more than one Emmy nomination. Bill Hader plays the role of the titular Barry. Other cast members of the series are Stephen Root, Sarah Goldberg, Glenn Fleshler, Anthony Carrigan, etc. The series premiered on March 25, 2018, on HBO.

Killing Eve–
Number of Seasons: 4
Based on the novel series named ‘Villanelle’ written by Luke Jennings, this British spy thriller series revolves around two women Eve and Villanelle. Eve is a new recruit undercover agent of the M16 who previously acted in a protection role that she did not like.

Eve has a fascination with female assassins which pays off when she is tasked with tracking down an international ruthless assassin Villanelle. But when the two women belonging to opposite hemispheres cross paths, both of them grow obsessed with each other.

Sandra Oh and Jodie Comer play the roles of Eve and Villanelle respectively. The other cast members of the series are Fiona Shaw, Owen McDonnell, Kim Bodnia, Sean Delaney, Camille Cottin, etc. The series ran from April 8, 2018, to April 10, 2022, on BBC America.

Only Murders in the Building-
Number of Seasons: 1
Steve Martin and John Hoffman created this American mystery comedy series that revolves around three individuals’ passions with the true-crime podcasts. They are Charles-Harden Savage, Oliver Putnam, and Mabel Mora. All of them live in an apartment building of Upper West Side called Arconia.

But when a suspicious death occurs, which the police treat as suicide, the three strangers come together to start their own podcast about the investigation of the death.