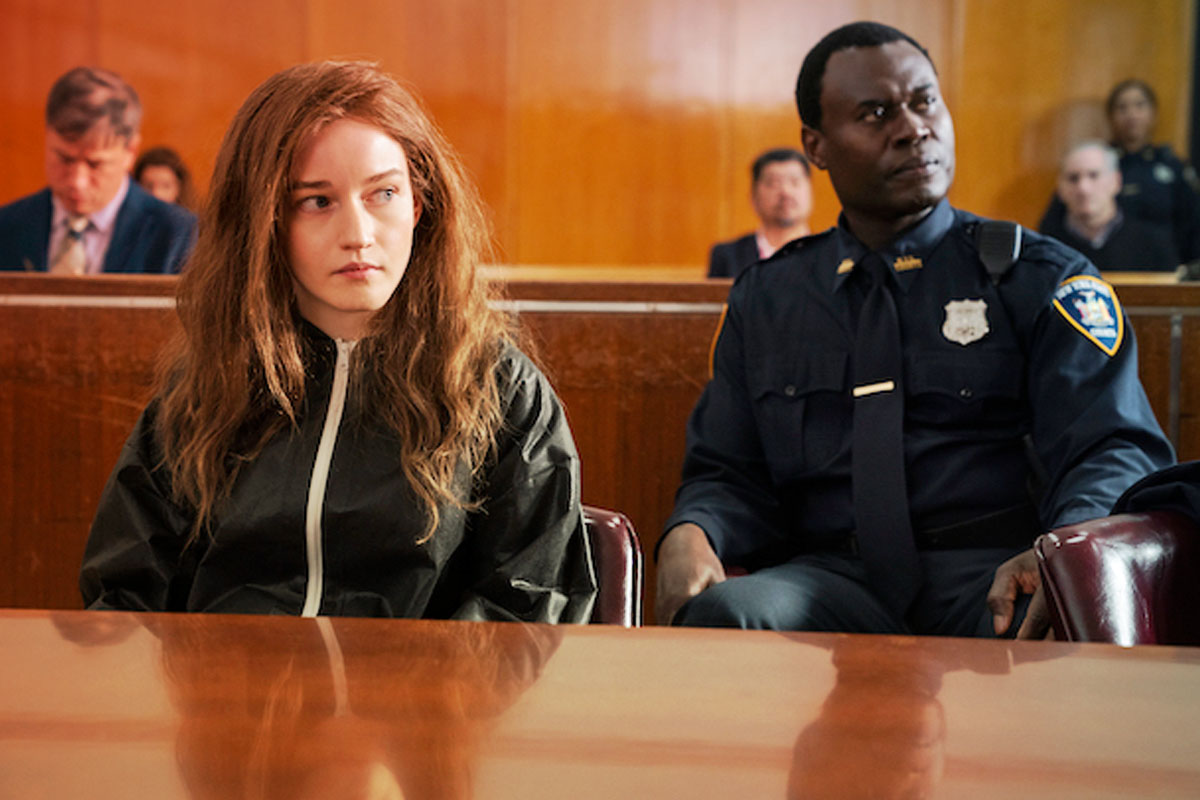 Inventing Anna Season 1 Story: Anna Delvey (Julia Garner) dresses in Balenciaga and Dior and won’t back down from her ‘vision’: after all, she’s a German heiress and a trust-fund brat. But why is she in an American jail, facing allegations of larceny and other offenses, when the youngster has 60 million dollars stashed away in another country?

This true-to-life miniseries encapsulates everything that’s wrong with the American banking system, as well as how people judge one another based on which Chanel version they’re wearing at the time.

In a news channel documentary, the true, unflinchingly candid Anna Delvey declared to a senior anchor, “Well, I don’t care what you think about me.” That is, back when she was still a free woman exhibiting her impeccable, impressionable sense of style.

The mini-series starts at the end, with Anna dressed in her jail uniform and dark spectacles, as if to keep up with whatever fashion trend was popular in the criminal society in 2019/20. Soon after, a disgraced reporter gets a whiff of Anna’s ludicrous charges: it disgusts her that a 25-year-old had misled some of New York City’s wealthiest and most educated.

The hasty history sets up the cat-and-mouse game that these two ladies seem to be playing throughout the nine-part miniseries—one seeks fame, the other wants repute.

If you’ve been following the narrative of this con artist/scammer, you’re probably aware that her coldness and matter-of-fact nastiness know no bounds. “Are you pregnant or just very, very fast?” she asks Manhattan Magazine’s Vivian Kent (Anna Chlumsky), a figure modeled on New York Magazine’s Jessica Pressler.

In truth, Pressler is the one who provides the millionaire—money she never had—the microphone to broadcast her charm and egotistical goals to the world. Director David Frankel’s investigation into Delvey’s life and misdeeds are more akin to a reality TV program in which a lovely blonde is supported by wealthy want tobes and ambitious suitors who can’t get enough of her European snobbery. Val (James Cusati-Moyer) says, “I just wanted to be her friend.”

The biggest con she’s ever pulled isn’t that seasoned lawyers, bankers, and anyone in the art world had either let Delvey ride on their backs or stolen from them—to the tune of 400,000 USD in one case; yes! —but rather how she was able to move from one con to the next without the victims of the previous con noticing.

Of course, they all wake up to Anna Delvey’s deception, but the fact that they’d rather be misled than embarrassed says a lot about the rich-people complex.

‘Inventing Anna’ is fascinating to the viewer, with all of its drama, snark, and high-society sophistication, yet it offers no relevant observations. The plot is simple: Anna is attractive, she dresses up as Barbie, she con people, and her underwear is worth more than a month’s income for a journalist. That’s how it’s done. However, no attempt is ever made to determine who is behind the unsteady doll and her play-castle.

Julia Garner smoothly differentiates her ruffian southern American antics from (‘Ozark ‘/also Netflix) the upscale setting of ‘Inventing Anna’ for someone who has just cemented her place as a bona fide star. Garner makes Delvey fascinating and enigmatic enough for you to be invested, and only blows up on your face when she has to: a typical character trait of hers in ‘Ozark.’ Garner’s enigmatic accent, which has sparked debate among internet film critics, is yet another illustration of her versatility: is it Russian? Unmistakably German! Who am I to say? Anna Cholesky’s relentless journalistic endeavors are admirable, even minutes before she pushes a baby out of her body.

If manipulation is Anna’s forte, the delusional princess meets a stubborn defendant in Cholesky’s Vivian. In a strange sense, the two performers’ explosive personality qualities complement each other.

‘Inventing Anna’ is grass behind the veneer, a con within a con, and, above all, a case study in how perception is everything for those who have it all. “It is vital to look well,” Anna Delvey explains. We all know why now; some of us had to learn the hard way.