Pink Shows off Her Toned Legs at the AMAs

Many influencers attended the American Music Awards, including Pink, who made it a family event by arriving with her team in a stunning look. 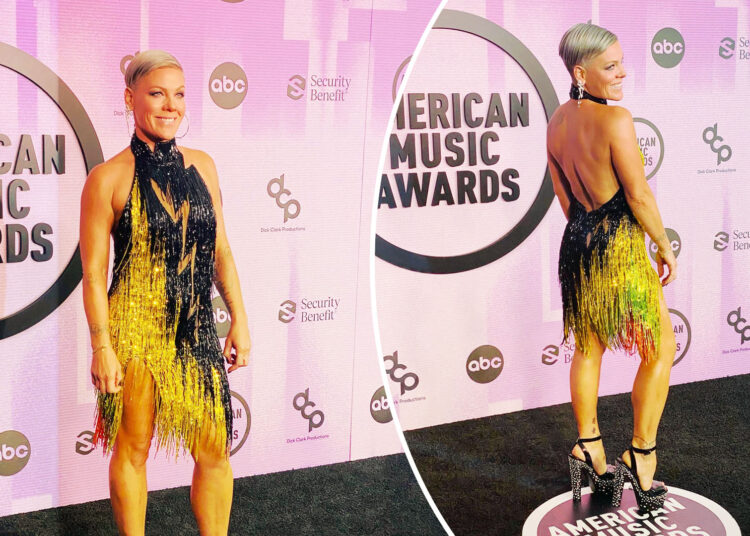 Pink and her family posed for several pictures while she wore a tasseled fringe dress that showed off her toned body. But the singer wore different outfits for her performances throughout the evening. What’s especially cute about them is that they were all pink, as her name suggests, which she chose as her signature color.

Pink brought her style best as she took a page out of her own fashion book. She donned a yellow and black halter neck fringed dress that we assumed was an earthquake dress because of the cracked sheer detailing.

The artist was supported on the one hand by her husband Carey and next to her young children Jameson Moon Hart (5) and Willow Sage Hart (11).

Pink’s eldest daughter, Willow, screamed at her mom’s style by sporting the singer’s once-prominent pink hair to complement her demure black dress and diamante tights. While dressing like his dad, little Jameson kept his long blonde hair down and donned a cute black two-piece suit and Off White sneakers.

Also Read: Hailey Bieber has a Birthday Surprise for Fans

Here you can check out some pictures of Pink from the AMAs 2022.

Pink’s performance of her new song, Never Gonna Not Dance Again, captivated the audience during her first performance. In honor of her show, the singer dressed in a pink-themed ensemble and donned roller skates. She paid tribute to the late singer Olivia Newton-John in her second performance in August after losing her battle with breast cancer.

Pink is back with the release of TRUST FALL, her ninth studio album, which she calls potentially her best album to date. During an interview with Good Morning America, the award-winning singer claimed that the highly anticipated album, which comes out on February 17, is also probably one of the “funniest” records she’s ever made.

“It’s very, very true to what I believe and where I’m at and what I feel and what I think a lot of people feel.”

In addition to the album release, Pink will embark on the Summer Carnival tour of the United States and Canada in 2023. She will be joined by a remarkable group of musicians, including Brandi Carlile and others.

Pink hasn’t been as active in the music industry since her last album, but with this one on the way and a potential tour, she’s about to light up her fans.