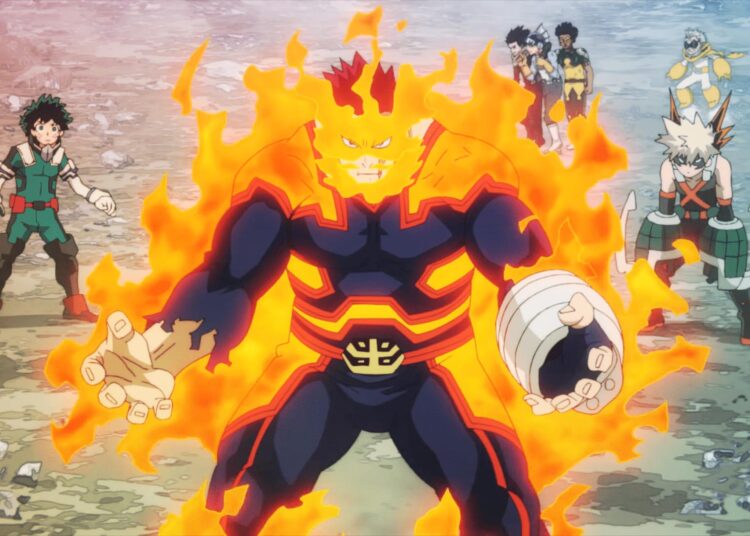 My Hero Academia Season 6 Episode 7 was released on 12th November Globally. The Paranormal Liberation and the Pro Heroes are now in conflict, although only the latter must be concerned about their reputations. Shigaraki and his followers are wild agents of chaos destined to transform society, but the public has little faith in them.

Alternatively, the Pro Heroes have an unspoken agreement with the people in which they are entrusted to correct wrongs and preserve the city if it is in Decay.

Unfortunately, “Disaster Walker” puts the heroes under strain, and as the above phrase captures, if they can’t take down Shigaraki, none of their efforts has ever truly mattered.

Also Read: The Way Of The Househusband Season 2 Netflix Release Date, and All Other Details!!!

My Hero Academia Season 6 Episode 7, Disaster Walker, begins with media helicopters capturing the damage in Jaku City and connecting it to the attack on Deika. While Toshinori and Eri kept an eye on the news, Deku, Bakugou, and Todoroki’s families went about their daily lives,

Shigaraki could cope with Endeavor and Ryukyu strikes in Jaku City despite having his quirks shut off by Aizawa. However, Endeavor’s surprise at seeing the Nomus leads the villain to reveal that he set Decay to overlook the Nomus’ capsules.

Shigaraki casually stated how he could not save all of the Nomus in the scene, which offered an interesting viewpoint on the battle.

Shigaraki had even used radio waves to control the current voltage, making the Nomus brighter, according to an overjoyed Garaki. Although these Nomus couldn’t think for themselves, they were the nearest to the High-Ends.

The villain continued escaping Endeavor’s attacks, but when he noticed Aizawa was getting in his way, he shifted direction to kill him. The episode is another example of Aizawa’s protective attitude toward his students, with the disabled teacher challenging Shigaraki while knowing that his death would remove the hero’s sole lead over the villain.

Realizing the gravity of their predicament, Endeavor refrained from asking Deku and Bakugou any further questions, instead urging them to help Aizawa. He told Bakugou to defend Deku because the villain was interested in Deku, not the other youngster.

Shigaraki avoided the attacks of Gran Torino and Endeavor, making a beeline for Deku. However, the OFA bearer posed as bait as Bakugou struck Shigaraki from behind, causing a massive explosion. Deku then launched an attack, knocking the villain away from Endeavor, allowing the hero to unleash a flaming punch on Shigaraki.

Gigantomachia began carrying the initial League of Villains members on his back. Despite Skeptic’s concerns about his responsibilities to safeguard Re-Destro, Dabi accompanied them.

Midnight gathered the scared hero students who constituted Team Edgeshot’s rearguard in My Hero Academia season 6, episode 7. Then, midnight directed Momo Yaoyorozu to produce sedatives and distribute them to the other heroes after seeing her leadership and decision-making abilities.

She made a passing reference to the fact that what she was going to do was unlawful, and she advised the kids to flee if the situation became untenable. My Hero Academia season 6 episode 7 concluded with Yaomomo taking command and delivering orders to her students in preparation for the capture of Gigantomachia.

Another excellent episode, My Hero Academia Season 6 Episode 7 built on the topics covered in Season 5 to reward devoted fans while providing enough dramatic moments to move the plot along.