Emma Corrin kept fans guessing at the My Policeman Premiere

The 26-year-old Emma Corrin was dressed in a colorful one-shoulder JW Anderson mini dress with an unconventional pattern that resembled a goldfish trapped in a plastic bag. 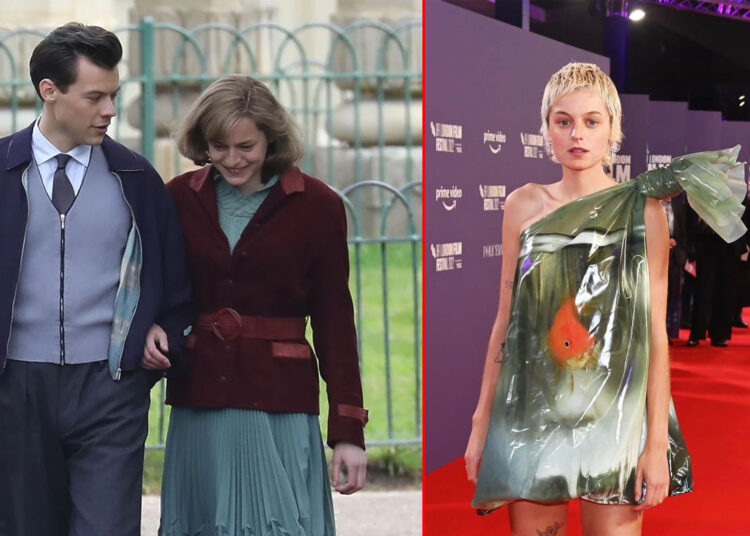 Emma Corrin made a bold statement at the premiere of My Policeman at the 66th BFI London Film Festival at the Royal Festival Hall on Saturday. Corrin, who stars in the queer romantic drama My policeman with Harry Styles and David Dawson, attended the film’s premiere in a costume that perfectly matched their eccentric sense of style.

The collection referenced early internet visual motifs such as dolphins, sunsets, and earth, but transformed them into something more mystical. Corrin’s latest outfit is straight off the runway; debuted last month at the Arcade in London’s Soho as part of Anderson’s Spring/Summer 2023 show.

Emma Corrin’s movie star outfit was tied at the shoulder with a length of curled material that fanned out to the side to resemble a tied seal on a bag. The outfit ended high above the knees.

The outfit was mostly olive green with hints of black and white and a bright orange center section which was designed as fish. However, they completed their look with a pair of open-toed kitten heels which revealed the black tattoo on her leg.

Here you can check out Emma Corrin’s Pictures from My Policeman Premiere.

On the red carpet, Emma Corrin and David Dawson, who plays Marion and Patrick, showed that they are best friends on screen! Harry Styles, who plays the film’s romantic lead, was conspicuously absent from the festivities but previously told MailOnline he was “gutted” not to be traveling with his co-stars.

In the upcoming film, Emma plays a woman who falls in love with Tom (played by Harry Styles) before the two become involved in a love triangle with an older man, Patrick. The film opens in theaters on October 21st and will be available to stream on Prime Video on November 4th.

The 26-year-old actor rose to fame as Princess Diana in the latest season of The Crown and will also star in the upcoming adaptation of Lady Chatterley’s Lover. They have been transparent about their gender transition, changing their Instagram bio to read “they/them” in July 2021.

Emma added that they were “very, very lucky” that their parents supported their efforts to explore their gender identity. Being non-binary and having to play female roles is certainly not easy, even for Emma, ​​who wears a chest belt; recently discussed how uncomfortable they felt in some of their acting outfits.

In an interview with Vogue, Emma admitted that appearing in Lady Chatterley’s Lover and playing Marion in My Policeman while wearing bras was challenging.