Fantastic Four, which was formally announced to launch Phase 6 during Marvel Studios' presentation at San Diego Comic-Con, has been the subject of almost as many fan discussions as any other Marvel Cinematic Universe movie in recent times. 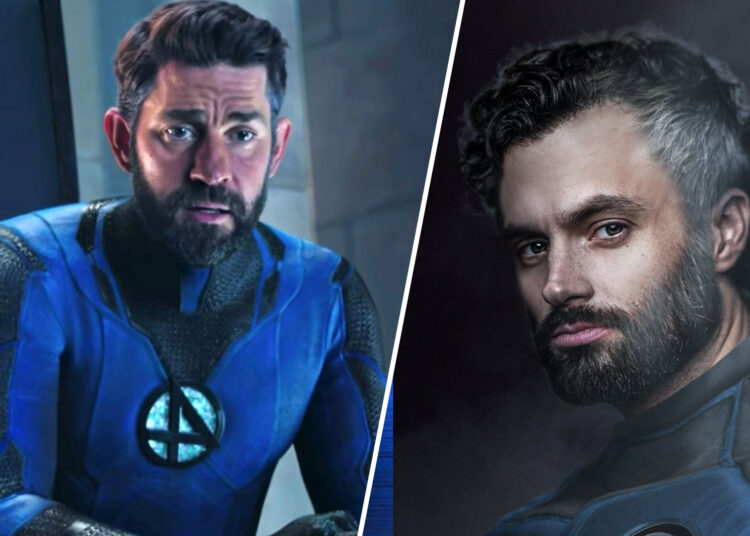 Fantastic Four, which was formally announced to launch Phase 6 during Marvel Studios’ presentation at San Diego Comic-Con, has been the subject of almost as many fan discussions as any other Marvel Cinematic Universe movie in recent times.

And now there is some rumor being Marvel to Cast Penn Badglye In Upcoming Fantastic Four. Is it real? Well, we’ll go into more depth about this here.

Only a few short months ago, John Krasinski brought the Fantastic Four’s founding member, Reed Richards, to life in the Marvel Cinematic Universe through his portrayal of the character Doctor Strange in the Multiverse of Madness.

But despite granting numerous fan wishes in that film, it appears improbable that he will make a comeback to play Mr. Fantastic from Earth-616 in the MCU’s first F4 standalone film.

Marvel Studios President Kevin Feige stated expressly that the crew would hunt for “the best actor for the job” for Fantastic Four, regardless of popularity, and that the search for the perfect actors would be long and complex. A recent story, though, suggests that Marvel may be interested in at least one member of that legendary cast.

Also Read: Marvel’s Kraven The Hunter Release Date: When Is It Coming?

The most recent role that John Krasinski has portrayed is that of a (dead) variant of Richards in the 2022 film Doctor Strange in the Multiverse of Madness.

While Faraci emphasized his desire for a Black Mr. Fantastic, he believes the MCU version will be “quite traditional:” For the character of Reed Richards, Marvel Studios has reportedly been considering white actors, Badgley in particular.

Will Badgley Be Finally Casted For Fantastic Four?

Over the past few years, Penn Badgley has established himself as a rising figure in Hollywood. He is most known for his recurring role on Gossip Girl and, more recently, for his performance in the Netflix drama You.

He wasn’t even considered a long shot when the initial Fantastic Four casting odds were announced in late 2020, but he has gradually gained popularity as a candidate to play the MCU’s top stretchy scientist.

At only 35 years old, Badgley would seem to be a terrific fit for the part and would arrive as someone with a comparable level of popularity and status to several existing MCU superstars before they joined. If Badgley takes on the role of Mr. Fantastic in the MCU, he might carry on that same pattern.

The Fantastic Four’s leader would be a logical place to start with the Reed Richards announcement from Marvel Studios, which could be made as early as the 2022 D23 Fan Expo. The studio’s major MCU panel will take place on September 10. The focus will then shift to the rest of the cast if and when that rumor is confirmed.

Recently, Gotham actor Drew Powell put himself up for the role of Ben Grimm/The Thing in the MCU, and The Mandalorian director Bryce Dallas Howard refuted rumors that she was being considered for the role of Sue Storm.

There is growing interest in seeing these cosmic quartet eventually take their position in the MCU, regardless of how the rest of the team comes together.

The Fantastic Four movie, which was announced during the 2022 San Diego Comic-Con, will launch Phase 6 of the MCU on November 8, 2024.

Jon Watts, who directed Spider-Man: Homecoming, was chosen to direct the film, according to Kevin Feige, CEO of Marvel Studios. However, Watts resigned in April 2022 and stopped producing superhero movies.

Has There Already Been A Fantastic Four movie?

Although there have been several Fantastic Four films, they have not yet received an official place in the Marvel Cinematic Universe.

Reason Behind Fantastic Four Being Late In Production

The X-Men, Deadpool, and the Fantastic Four were among the A-list Marvel characters that Disney didn’t have the legal right to use for a very long period. Since Sony-owned Spider-Man, the MCU was unable to use him until 2016.

When Disney and 21st Century Fox reached an agreement in 2017, then-CEO Bob Iger of Disney declared that the MCU would eventually include the X-Men, Deadpool, and the Fantastic Four.

During that year’s San Diego Comic-Con, Marvel studio president Kevin Feige made a formal announcement about the Fantastic Four movie once the acquisition was completed.