Chickenhare and The Hamster of Darkness: Every Update Here

by Sujit Maity
Reading Time: 5 mins read
A A
0 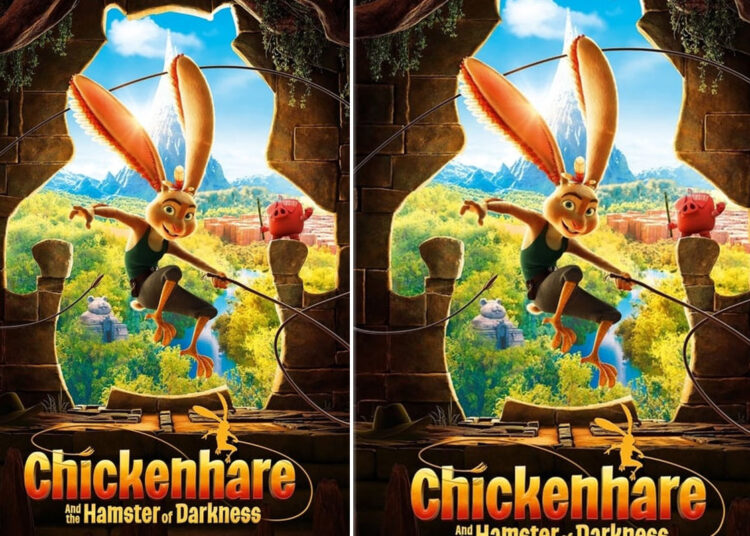 The movie chronicles the exploits and coming-of-age journey of Chickenhare, a unique hero who was born half chicken and half hare and who, despite his peculiarities, is eager to fit in and become an adventurer.

Chickenhare and The Hamster of Darkness- Plot:

Twenty years ago, the intrepid hare brothers Peter and Lapin were unsuccessful in their search for the fabled Hamster of Darkness. On their quest, they also discover a child who is a cross between a chicken and a hare. Peter names him Chickenhare and raises him as his son. The chicken here is passionate about his intentions to emulate his father when he grows older.

Chickenhare makes an effort to pass the Royal Adventure Society trials in the current day to become an explorer, but his disguise, which he uses to hide his chicken traits, weighs him down and prevents him from passing the exam.

Unfazed, he resolves to look for the Hamster of Darkness to demonstrate his prowess as an explorer and meets Lapin, who was detained after attempting to unseat Peter as the King of Featherbeard but who knows where the relic is located.

Using one of Chickenhare’s feathers, Lapin can flee, and he then embarks on a search for the item with a group of inmates. Together with his tortoise servant Abe, Chickenhare is determined to stop Lapin.

When the two travelers reach a desert city in search of a guide to help them through the Desert of Death, two of Lapin’s thugs stop them. Meg, a skunk adventurer, rescues the duo and offers to lead them through the desert.

Later, the gang is kidnapped by Pigmies, pig-like tribal beings, who want to sacrifice the three to their deity by tossing them into a volcano. Pigmies mistake Chickenhare for a god.

Chickenhare blames his misfortune on his looks while being held in a cage, but Meg pulls him out of it by explaining how she once accepted her skunk nature and urging Chickenhare to do the same as they go on.

To discover the Hamster of Darkness, Chickenhare, Meg, and Abe visit the temple in the Frosty Mountains and undergo three separate tests.

After completing these tests, the group finds the real artifact—a scepter with a bright ice shard implanted in its top—hidden in the frozen grave of the long-extinct hamsters. Lapin and his gang, on the other hand, show up there and steal the scepter from the group.

Beginning in late 2019, production on Chickenhare was finished in early January 2022. Over 200 individuals contributed to the film’s creation over three years. After spending many years as an animator at the studio, Benjamin Mousquet made his directorial debut with Stassen. He was immediately captivated by the movie’s themes of inclusion and camaraderie. [8] Both filmmakers took pleasure in bringing up popular brands like Indiana Jones…