The Big Boss 14 winner recently posted some hot pictures on social media which made her fans jaw drop. 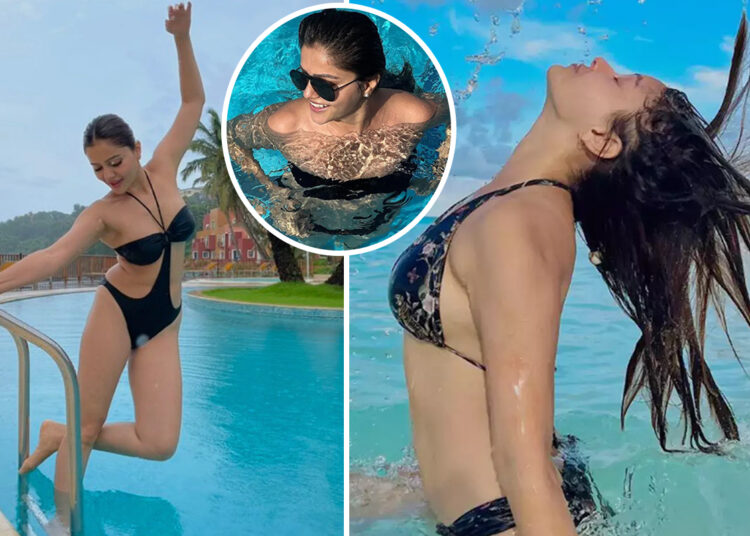 Rubika Dilaik Update: If there’s anything hotter than the temperature these days, it’s Rubina Dilaik. The beautiful actress has decided to raise the temperature further with her recent Instagram posts. Rubika is gearing up for joining Khatron K Khiladi and she will be heading toward South Africa for her shooting.

Recently she went to Leela Hotel in Goa and entered the swimming pool wearing a green bikini which had shiny prints and strings attached to it, her matte lipstick and gold bracelet were looking just perfect even though she was in a pool.

Her Instagram comment on the post was full-on heat and fire emojis and her fans went crazy seeing her in this sexy avatar. A few months ago Rubika was trolled for gaining weight after her recovery from Covid but trollers would probably become her fan account after seeing the pictures.

Rubina is not just a successful actress but has also become a successful YouTuber as her YouTube channel has almost 7 lakh subscribers where she shares her daily lifestyle, health and style tips, travel vlogs and some sneak peek into her house.

The past few have been quite amazing for Rubina, she won the 14th season of Big Boss which she entered with her husband Abhinav Shukla.

Now with all the confidence in the world with her, she will be entering the 13th season of Khatron K Khiladi with fellow contestants that include Munawar Faruqui, Faisal Shaikh, Sriti Jha, Nishant Bhatt Shivangi Joshi, and more.

Rubika in an interview said that she is all prepared for the show and is aiming to win it. She is getting a huge chunk of money reportedly 10-12 lakhs per episode for the show.

Rubika will also be making her Bollywood debut later this year with her upcoming movie Ardh which will also feature actors Hiten Tejwani and Rajpal Yadav in comedy roles, the film is scheduled to be released in September.

Solo Leveling Season 3: Update On Release Date & Who Will Return?