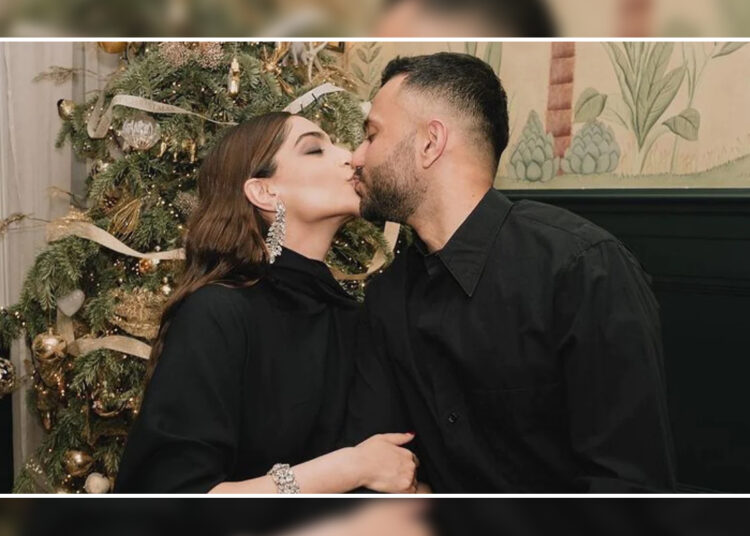 Bollywood Actress and style icon Sonam Kapoor and businessman Anand Ahuja has shared the post on social media on there 4th wedding Anniversary. They both were married on May 8, 2018. Sonam kapoor has shared the pic on her IG account where they both were seen kissing each other.

While on the other hand Anand Ahuja has shared the early pregnancy pics of sonam kapoor. Sonam Kapoor has wrote the caption on her social media on her post is:- “Happy happy Anniversary @anandahuja I’ve always been an incurable romantic and believed in all the love stories ever written.

You’ve surpassed all expectations of what I dreamt and wished for. I thank the universe everyday that gave me the best man in the world! Love you the most, my baby. 6 years down and an eternity to go.

#everydayphenomenal.” Anand Ahuja has also shared a video on his IG account and caption the post:- “Girlfriend 6 years, wife 4 years and as you can tell in this video, her early days of mom-to-be this year!

Happy anniversary my #everydayphenomenal @sonamkapoor.” Anand ahuja has also shared one post where they both were seen embrace each other in his London house and he captioned the post with:- “..the most giving, selfless, generous person in the world.

Only kindness and wholeness in your soul. @sonamkapoor … you inspire me everyday. Happy anniversary my #EverydayPhenomenal.” Replying to the post, Sonam wrote “Always and forever and every lifetime.. my soulmate.”

Their friends from the bollywood industry has also congratulate them with the warm wishes Sonam’s Mother Sunita Kapoor, Shanaya Kapoor, Shibani Dandekar, Swara Bhaskar and other ones included and they send the warm wishes in comments on her post.

Sonam Kapoor is not a very successful actress of bollywood but she is beautiful, tall and a smart personality. But her luck is not supporting her in Bollywood Movies but she is a very good wife as we have seen in her recent posts and we also expect that she will be the very good mother also.

Also at the time of marriage the father of sonam kapoor Anil Kapoor is looking so young that people often pass jokes that anil kapoor is looking younger than his husband Anand Ahuja. But Jokes apart they both look very cool and made for each other.