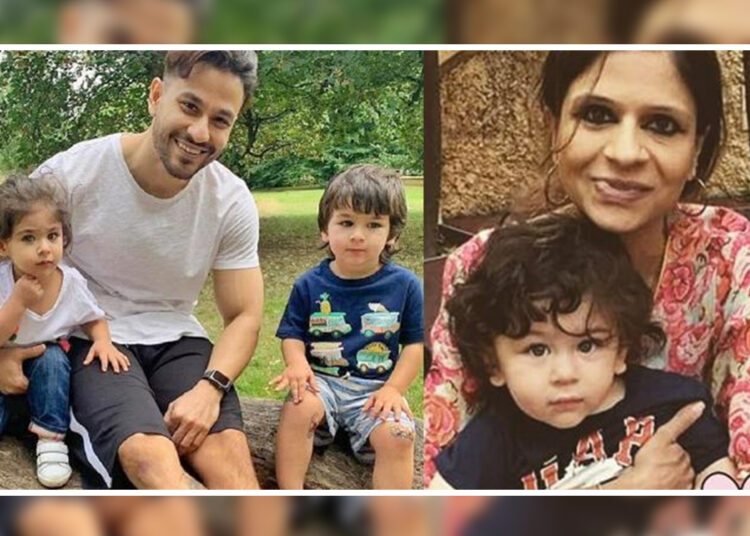 Taimur Update: The relationship between aunt and nephews/nieces is one of the most pure and pious, aunts love them like their own children and our very own Taimur Ali Khan is one of the luckiest one to have an aunt like Saba Ali Khan.

Saba is a jewelry designer and she is the sister of Saif Ali Khan and Soha Ali Khan. Recently she shared a photo of her Instagram post in which she was sitting with Taimur and she captioned the photo with some harsh words for trollers.

The incident that led to speak her on the matter was of few days ago when Taimur was recorded by paparazzis in front of his house.

Taimur Gets Support From Aunt & Uncle.

Paparazzi were taking picture and suddenly a guard ordered them to stop taking pictures and Taimur repeated the same thing that was said by the guard which goes like “Band kar”, Taimur listened and repeated the same thing unknowingly, and something that kids usually do, but the video got viral on social media and people started criticizing his behavior as they found it rude and inappropriate.

Saba took a dig on the trollers with her post where she mentioned that people should be ready to listen some honest and simple things from a 5 year old kid’s mouth especially when someone chases them all the time.

She requested people to let the children be as they are and let them grow, learn and evolve and there is no need to be a fan or a fanatic of a kid. In the end she wrote God bless all the kids. In a recent interview, Taimur’s father Saif Ali Khan and nephew Kunal Kemmu defended his actions and shut down the trollers.

Kunal in an interview said that Taimur has been facing these things even before he was 1 year old and he couldn’t say anything because he was a kid but now he a young boy and he can speak and hence if he doesn’t like something, he will say it on the face and we cannot expect a child to be decisive when he says something, if kids don’t like something, they will say it no matter what anyone thinks.