Moon Knight Episode 5 Review and Breakdown: What could happen in Episode 6?

Moon Knight Episode 5 has really shocked the MCU fans, Marc Spector and Steven both the personalities are fully explored now, be ready for the third one. 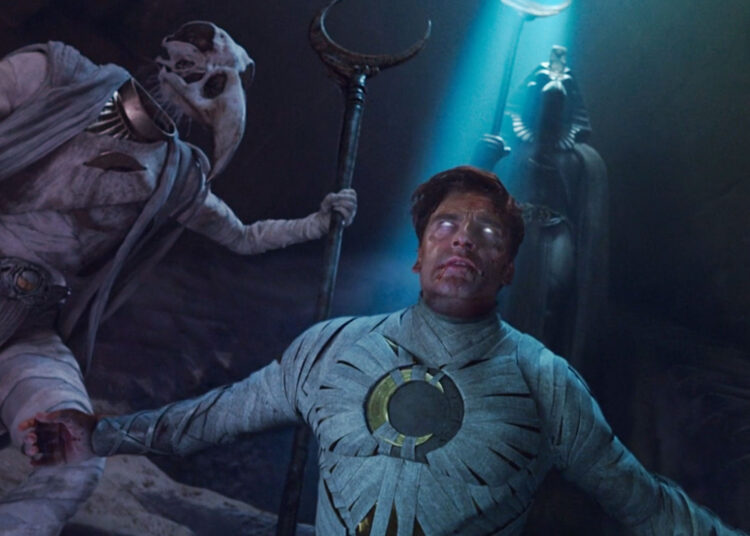 Moon Knight Episode 5 has been released today on Disney+ and the fans are in shock after the second last episode’s end. Although episode 4 was also quite shocking this one is way more than the last episode, I think the character arc of every personality of Moon Knight has been completed now and we know that anything could happen in the next episode 6, which will be the finale episode of Moon Knight.

Episode 5 was all about Marc Spector’s childhood traumas due to her mother and the road he chose after one incident.

Episode 5 of Moon Knight has been released today 27th April 2022 and the fans have been amazed by the cliffhanger end of the episode. The Episode starts with one Boy’s cry for Help and then we can see Steven and Marc in front of Taweret (Egyptian Goddess) then again Marc found himself along with Dr. Harrow all the scenes were quite confusing.

But in the Moon Knight Episode 5, we got to know about the childhood of Marc Spector whose little brother accidentally drowned and his mother thought that Marc was responsible for his death and after which she started hating Marc and beating him occasionally and that was the time when Marc Spector created Steven Grant’s personality and year after year difference between the two personalities widened.

But at last, we can see how Steven Grant is taken by the people of Duat and he is frozen to sand there. So Is he really dead will he ever appear in Moon Knight, and What about the third personality of Marc Spector Jake Lockley? Will he appear in the final and last Moon Knight Episode 6?

In an interview with  Screenrant Oscar Isaac has said that his fans will certainly know about who is inside the third sarcophagus, which was seen in the Moon Knight Episode 4 at the end. So we may know about it is the last episode I think.

What after Moon Knight Season 1: Will we get Season 2?

As per the Interview of Oscar Isaac and May Calamawy on Screenrant, where they said The last two episodes are going to be more Mysterious and these could lead to new Beginnings too. Hence probably we would know about Season 2 will happen or not in the next Episode 6 which will be the last one in Moon Knight Season 1.

On the future of Moon Knight in MCU, the Director of the show Mohamed Diab had said that:

I love a lot of people. I love everyone in the MCU. Oscar said this idea about teaming up with the Hulk. It’s a crazy idea to have two people, in a way, who have two characters interacting with each other. Just imagine that back and forth, back and forth, between the four of them. It would be so interesting. I like Mark Ruffalo, for sure.

I love everyone, but I’m telling you that interaction could be very interesting.

COmment Us below if you would love to watch Moon Knight Season 2.