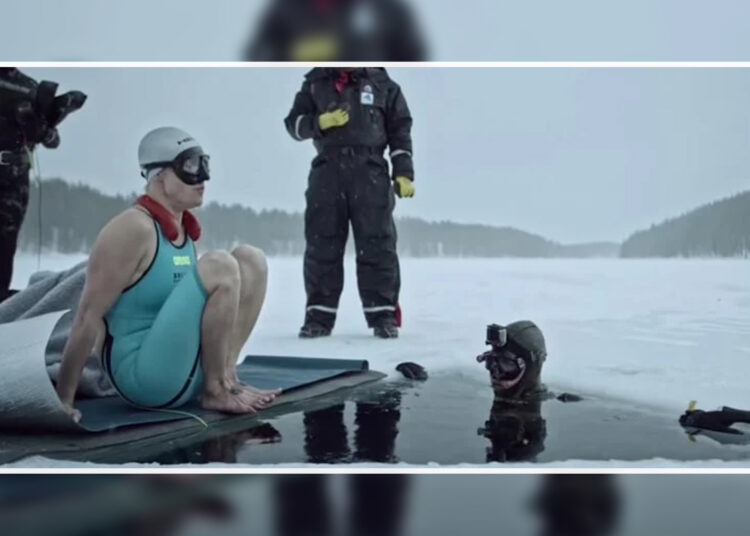 ‘Hold Your Breath: The Ice Dive’ trailer release for Netflix’s new documentary. The documentary pilots around the tale of Johanna Nordblad, aiming to make a new world record. Record for the longest distance traveled under the ice in one breath.

The story revolves around determination,  courage, and breaking records.  Guess, the documentary did leave us to stick to holding our breath. We are all left shocked only by imagining the experience that the diver might be having in the freezing water.

The trailer gives us a glimpse of the diver sitting on the ice. While preparing to dive into the water from the ice hole. You can see, two men starting the countdown behind.

The lady thinks “Girls can do anything that men can do,” in her mind. In addition, the trailer gives us a glimpse of the freezing island, covered with snow. Also, featuring the lady swimming under the ice. Wanting to explore her limits and to know how she can dive. Consider that she is diving from one ice hole to another with only one single breath.

The lady, claims that her official record as the world record for women is 50 meters. After going into the ice water, the divers touch the ice from under the water. Confirming to us that the ice has not been broken for almost three years.

She is trying to dive further and desires to break the record by making eighty meters record in cold water, which is a long drive, and she did it to go 82 meters and break the records. There is nobody who has been dived as far as she could.

We can even see the moment when the lady diver thinks about something wrong is going to happen to her. Although, we then later see her driving home by herself. Additionally, we later find out that the countdown is ongoing. Revealing that one minute, where the diver believes that difficult things are just a part of it. Also, they should not be left undone as the things are hard to do.

The documentary series is all built up to give us lessons about the battle with hardship and difficulties. The ending of the trailer portrays diver Johanna Nordblad diving into one ice hole.

Trailer, Release Date, And Some Facts

Making its way to Netflix, Johanna Nordblad’s documentary series will launch on 3rd May.

Check out the trailer here:

Nordblad was in a bike accident in 2010, resulting in a broken leg. After the accident, the doctor advised her to use cold water treatments. This resulted, in her 2015 making a women’s world record by swimming 50m/164ft under the ice. Quiet is a nice way to use disadvantageous opportunities in your favor.

Nordblad also swam a CMAS-certified 103 meters (338 feet). In addition, she did this without fins or a wetsuit. Almost going beneath 60-cm (1.97-foot) thick ice at Lake Ollori near Hossa, Finland in March  2021.