Space Force Season 2: What do we know about it so far? 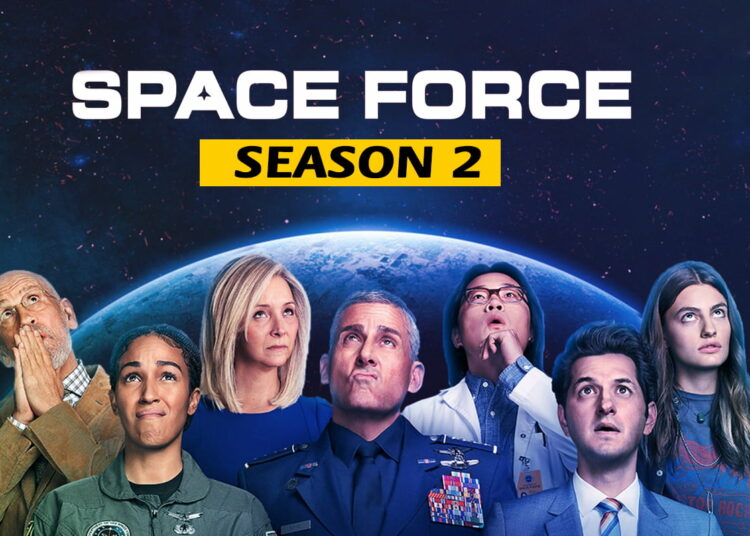 Space Force Season 2 Updates: This newcomer season made its place among the comedy series by Netflix this year, hitting the screen on May, 29. Created by Greg Daniels, it stayed it’s the duration of 10 episodes that struggled a bit to meet its high standards set by the All-star cast.

Most of the reviews read as ‘average ‘ for its floundering between opposite genres, yet is approved for renewal of new episodes worth of a season as the main actor  Steve Carell who is also the producer, seems to have his sight set on its storyline.

Similar to Carell’s all-time hit ‘The Office’s, this too is set in a workplace around a group of people tasked with establishing the sixth branch of the United States Armed Forces namely the United States Space Force. Carell’s character, Mark Naird is on guard as the first general,’Chief of Space Operations’ who is shouldering the weight of the show as the spotlights are focused on him and his synergized efforts to get ” boots on the moon” by 2024, per orders of the president.

When and what is expected out of this season?

They are yet to confirm its renewal as things at the end of the finale looked uncertain, questioning a follow-up but Carell has already given its latter part a thought.

“I have to look for the next big stress- relief song scene. For General Naird, I always want to look for some new opportunities for him -and the older and more surreal, we better to see how they might deal with some of the stresses and strains of his job “

” That’s something that I’m kicking around at this point. What other odd, quirky ways of dealing with his life are we going to see? And whether it’s a song or something else. I find stuff like that really funny when something comes out of the blue in a surreal and odd way. I’d like to see some more of that”

The last episode took off on a cliffhanger when the Habitat One crew returns only to discover that the Chinese have completely crippled the American base in a military coup and consequently both of the nation’s delegates are stranded on the moon unless General Naird finds a way to swoop in like a savior. Evidently, this season has a lot of decluttering to do which is soon to resume its production with most of its original cast, except for Mark’s father Fred who recently passed away.

Follow us to keep posted on the latest updates.