Bella Hadid, the highest paid model, appeared in the photos of Swarovski while wearing n*de catsuit! 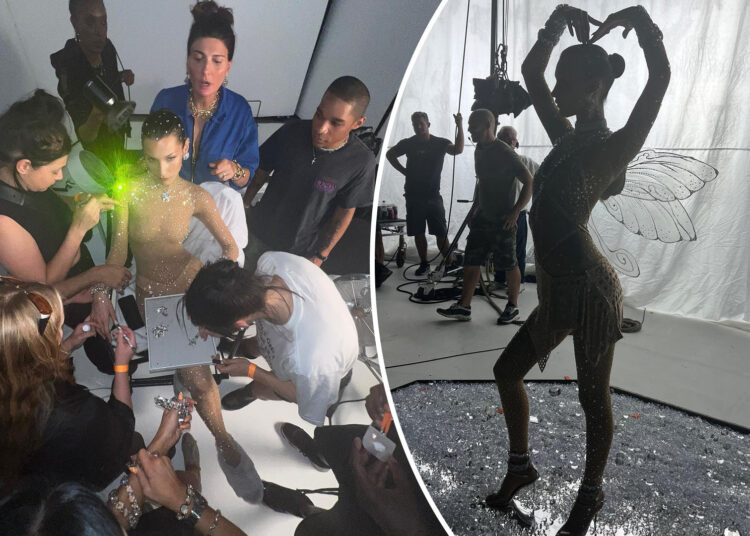 Bella Hadid is always in news and this time related to her n*de catsuit. We have seen a lot of models and celebrities coming with a bold fashion sense that may shock their fans.

Among them are some revealing clothes and some strange style that appears to be fashionable but at the same time quite out of line. Something like this has recently happened with many models who came in front with n*de catsuits.

Among them is the famous and one of the highest-paid models in the world Bella Hadid who was recently seen wearing a n*de catsuit behind the scenes in Swarovski photos.

The 26-year-old model Bella Hadid was looking very amazing in her Instagram photos. The amazing model has posed in a crystal-covered n*de catsuit that made headlines for many news. She added butterfly wings to the back that made the photo shoot more attractive.

Here you can have a look at Bella Hadid’s See-Through Catsuit.

Her hair was pulled back and tied into a bun while she managed everything with crystal earrings. It was posted by the magazine itself where Bella Hadid posed confidently by lifting her arm in the Shadows.

In another photo, the model was sitting down and surrounded by many people who were also giving epic looks.

Coming to the Instagram video then it was uploaded by Bella Hadid who is playing on a camera screen.

For the caption, she has tagged the jewelry line. As soon as the model uploaded her recent fashion video, a lot of fans started appreciating her. Some called her the gift of Christmas while others loved the backstage pictures.

Some fans even came thereby calling her one of the most beautiful women while others declared her Fairy Queen. One of the followers became so happy that he or she quoted the new song by Taylor Swift called Bejewelled.

Before making headlines through her n*de catsuit, Bella Hadid was seen in a different catsuit while she was wearing it in one of her fashion shows during Paris Fashion Week.

It was in October 2022 when she was seen wearing a long-sleeved n*de catsuit. This catsuit had no crystals added and with her down. Her makeup was also looking pretty natural on the ramp walk.

It was back in September 2022 when Bella Hadid made headlines through her topless photoshoot. She used her hands to cover her chest and gave a bold look to the camera.