The latest 'Transformers: Rise of the Beasts' teaser gives us our first glimpse at new Autobots, iconic Optimus Prime, and the wild Maximals! 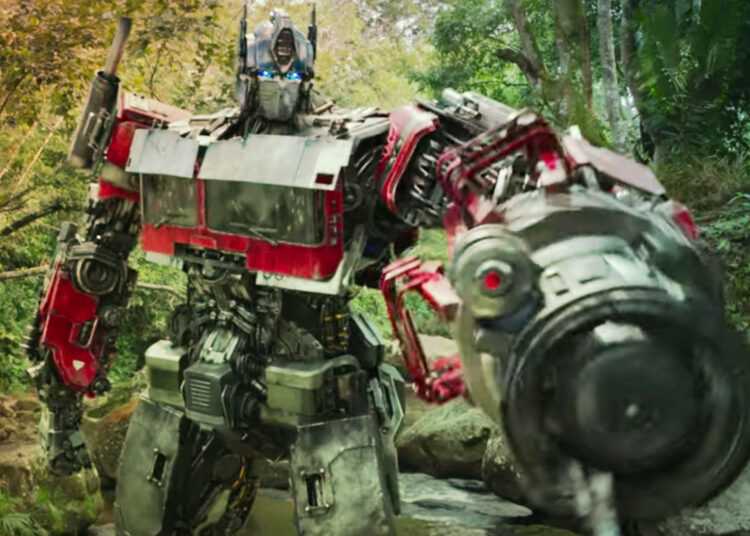 After years of feeling like Paramount’s live-action Transformers films were coasting on their beautiful looks, the first teaser trailer for Transformers: Rise of the Beasts is here to tell everyone that Beast Wars has always been the more significant part of the more extensive Transformers series.

With a glimpse of a giant mechanical gorilla charging into the scene and banging its chest like King Kong, the Transformers: Rise of the Beasts trailer pulls no punches and swiftly captivates viewers into action.

This is a thrilling moment for viewers of the expanded Transformers world since it depicts the Maximals’ leader, Optimus Primal, in all his strength.

Though not proven by the trailer, the Maximals are believed to have arrived from the future as well, with Primal, voiced by Ron Perlman, informing Optimus Prime of an imminent threat from “both your past and future.”

Prime, as voiced by his most well-known voice actor Peter Cullen, is depicted with his new design to fit the Bumblebee continuity. With a boxy body and the return of his distinctive faceplate, his style harkens back to the original ’80s show.

Prime’s vehicle shape also reflects his return to classic form as he travels across a bridge in his antique flat-nosed truck form, styled with his brilliant reds, blues, and silvers.

Noah and Mirage are also introduced in the trailer. Continuing Sam Witwicky’s heritage, Noah is seen in frantic chaos as his car, adorned with the classic Autobot logo, takes control & forces him to run from the police.

Mirage, his new car, and a buddy are slated to be voiced by Pete Davidson, and he uses the opportunity to show off the reason for his name by making multiple false holograms to let them escape their pursuers.

In a sequence of dramatic action scenes, the teaser reveals the enlarged roster of robots in disguise:

The Bumblebee is shown in an off-road vehicle mode compared to previous forms. Along with him comes the next Maximal we meet: Cheetor.

The Maximal demonstrates her dynamic falcon mode as well as its powerful flamethrower. Arcee, the most recognizable female Autobot, follows the falcon. Her design, like Prime’s, is inspired by her appearance in the original television series but modified to a more modern feel. Given the franchise’s excess of male Transformers, the addition of Arcee is a significant step forward for the series.

Although there are no Decepticons in this teaser, there are plenty of villains, including our first glimpse at the Terrorcons. First, we see Battletrap rushing at the Autobots & Maximals in his orange armored truck mode and robot form.

The fight is brutal, and Bee appears to be in grave danger, demonstrating the enormous threat that the Terrorcons offer to our heroes. Peter Dinklage will provide the Terrorcon leader’s voice.

The Transformers: Rise of the Beasts trailer concludes with a touching scene centered on Elena, one of the film’s other human characters.

Dominique Fishback plays this character, who, in typical Transformers fashion, looks utterly uninterested in the notion of a changing robot/motorcycle.

By the end of the trailer, we’ve reconnected with Noah and Mirage. As the former boldly strolls out of the car, the latter quickly turns into his robot form around him, and the two looks to have developed a greater connection and synergy.