The new Pitch Perfect spin-off, Bumper in Berlin, is screening on the Peacock, and we're very excited to have Elizabeth Banks back on our screens, but as executive producer of the new project. 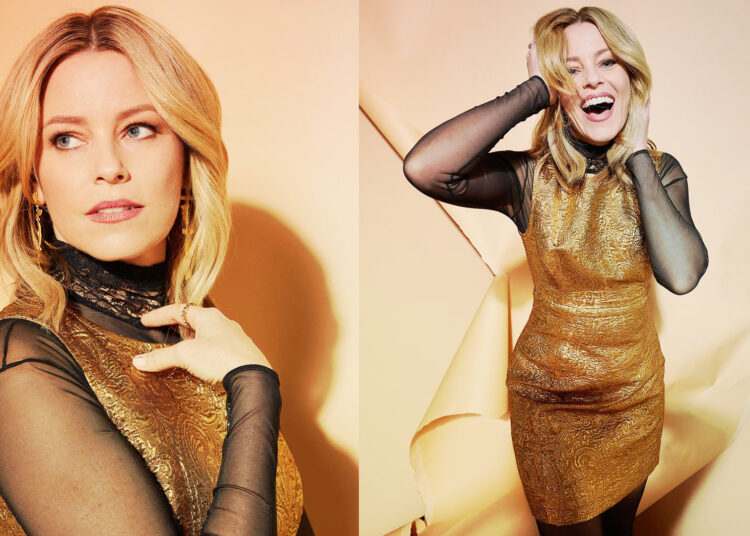 The star-studded cast and Elizabeth Banks teamed up for a fun shoot for Billboard, and Banks literally glows in this golden number that we can’t wait to tell you about.

Banks looked ridiculously s*xy in a shimmery gold sleeveless dress layered over a sheer, long-sleeved bodysuit that tightly hugged her figure and showed off her toned arms.

In the first photo, she was in a group pose with the stars of the project, looking radiant, cuddling with Lera Abova and showing off her fingers adorned with shiny rings. The other celebrities in the photo looked fit in their various ensembles. We love Jamil’s jacket and Abova’s chic patterned jacket, which she paired with black pants and a white tee.

Here you can check out some Pictures of Elizabeth Banks In a See-Through Dress.

The actress gave a wider and closer look at her complete look and her stunning side profile in the second shot in a close-up portrait that showed off her natural makeup with pink lips and pearly blue eyes.

She styled her blonde locks in loose waves with a center part that fell over her shoulder. Banks completed the look with matching gold earrings and a hearty laugh in the third shot.

In the series, Devine plays the role of Bumper Allen, former leader of The Treblemakers, who receives a call from Pitch Perfect 2’s Das Sound Machine’s Pieter, played by Flula Borg, who invites him to visit Germany to launch his music career. Devine viral video.

The executive producer told Billboard how she and other members of the crew and cast are always trying to bring more “Pitch Perfect” to fans. She revealed that they are looking for ways to expand the franchise and take inspiration from the MCU, especially what they did with Loki.

“But we were looking for a way to expand the Pitch Perfect universe. Honestly, we took a lot of inspiration from the Marvel Cinematic Universe and specifically what they did with Loki. We took the villain out of the family and gave him a whole new world where he had great adventures, while still keeping the things people love about Pitch Perfect.