Kim Kardashian Appeared In All Pink at Baby2Baby Gala!

Kim Kardashian was seen in pink cut out dress with platinum hair in Baby2Baby Gala! 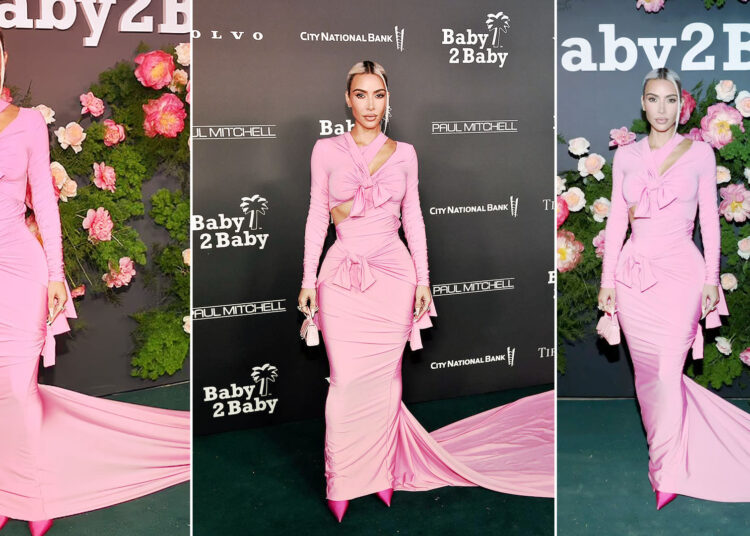 Kim Kardashian Appeared In All Pink Attending Baby2Baby Gala! A lot of red carpet appearance has become viral when some celebrities have shown the best of their fashion. Some red carpets were related to music events while others were related to honor the fashion icon.

And if we talk about such things, every very red-carpet look of this celebrity is nothing less than the headline of every piece of news.

Talking about any recent one the Baby2Baby Gala has happened and a lot of big names appeared. Among them is the famous Kim Kardashian who is looking gorgeous as ever in her pink gown.

The 42-year-old Kim Kardashian recently appeared in the Baby2Baby Gala that happened in Los Angeles. The event was held on 12 November 2022 on Saturday when a lot more celebrities were seen in their best fashion. Coming to the reality star then she was looking very beautiful in her pink gown.

The mother of 4 has shown her best-fit body with a pink gown that had cutouts and revealed her grade physique. This gorgeous frock was accessorized with pink heels and a pink purse that was matching with every look. Coming the brand then it is nothing else than Balenciaga.

Here you can check out the posts of Kim Kardashian in All Pink.

The makeup of Kim Kardashian was flawless as she appeared in nude lipstick. The hair of the reality star was also to the point as she tied up in a bun. It was not just her but also her mother and sister Kylie Jenner who appeared on the same night. Coming to Kylie Jenner then she was looking stunning as ever in her black sheer gown.

The look of Kylie Jenner was appreciated by many and it feels like she is opting for black recently for almost every red carpet look. The same as happened a few days ago when she appeared at one of the fashion awards where she opted for a black gown in sheer.

This fashionable outing of Kim Kardashian just appeared when she styled herself for her 42 birthday bash. The model was looking beautiful in her silver bikini top and with the jogger.

The iconic look of Kim Kardashian was definitely loved by many people. Coming here then look then she was wearing a t-shirt while Kendall Jenner was having a red and white dress.