Andrew Garfield was seen having a funtime with his friend in Malibu as he went to grab sushi!! 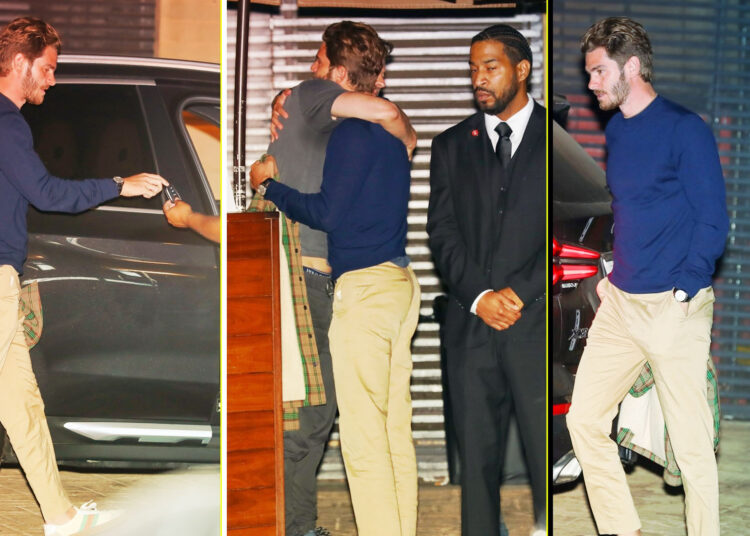 Andrew Garfield was spotted in Malibu grabbing some sushi for dinner. It is never too late to grab some food at night for dinner.

That is the reason why we can see a lot of celebrities having a fun time as they went out to have dinner.

Sometimes it is their solo outing for dinner time or sometimes we see them with some friends or their partner. If we talk about such things then we have seen a lot of celebrities doing so in recent days. Among them is the actor Andrew Garfield who was seen grabbing some Sushi for dinner in Malibu.

Coming to his look then he was seen wearing a sweater of navy color and a shirt that was brown and green in check. He was also seen in tan trousers and smiling with his friend. He recently went back to California after spending a great time in Italy.

Also Read: Justin Bieber Started to Perform After His Battle With Paralysis

Here you can check out some pictures of Andrew Garfield

It was recently when Andrew Garfield was seen having a fun time at the beach with his friends. He was seen doing a backflip in the water with his friend while enjoying time in Italy. He was shirtless and wearing a black shot that was proper for any swimming costume.

If it is not related to his outing or vacation then Andrew Garfield makes headlines throughout his career.

It was recently when the announcement came that Andrew Garfield will be the one who will be playing Virgin Atlantic founder Richard in the series called Hot Air. It would be considered his biggest project for 2022.

In this project, Andrew will be the first after his break. It was a few weeks or months ago when Andrew Garfield announced his break from acting.

It was a temporary break as he was quite tired from the promotion and release of his movies. He just wants to have some time with friends and with himself. And that is the reason why he decided to go on vacation and outing.