The 50-year old actress Jennifer Garner was spotted at the sets of her upcoming Netflix comedy while covered in Christmassy vibes. 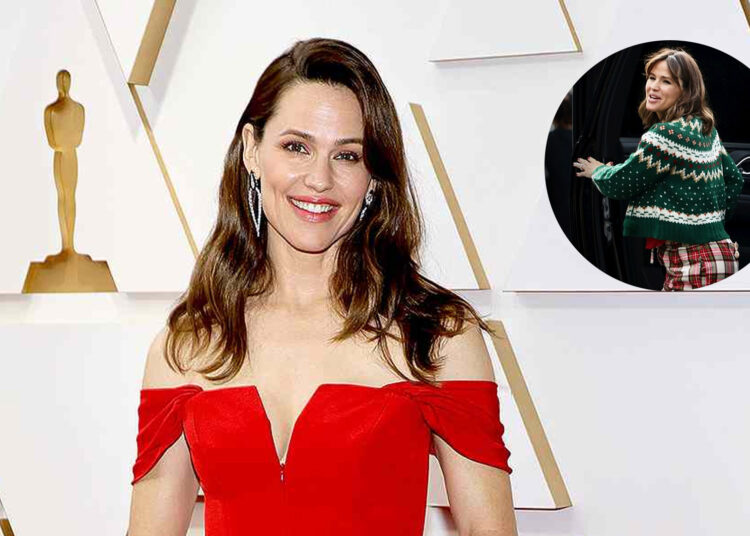 Jennifer Garner was recently spotted wearing a very Christmassy dress while being on the sets of her upcoming movie – Family Leave. She was seen in Los Angeles, California where the shooting of Family Leave is happening nowadays.

Jennifer Garner Is Still In the Christmas Vibe

On Thursday, January 12, after 17 days of Christmas, it seems like Jennifer Garner hasn’t bid farewell to the holiday vibes as on the sets of her upcoming comedy movie Family Leave, she was spotted wearing a red Christmas sweater.

On the set, Jennifer was seen covered in a red-checked Christmas pajama and a green sweater with wintry prints. She was captured in the outfit while arriving at the sets of the movie which is based on the book – Bedtime for Mommy.

The 50-year-old actress was seen getting out of her comfortable and classy black SUV. The Adam Project actress will be starring as the main lead in her upcoming movie – Family Leaves beside the 48-year-old actor Ed Helms.

Apart from the green sweater and red pajamas, on her feet, she sported a pair of chestnut-brown fur-lined sheepskin boots. Her hair seemed shoulder length and was styled in loosely cut waves.

Jennifer’s hairstyle consisted of curtain bangs that were swept sideways to frame her face. She accessorized the outfit with a diamond ring sitting on her finger.

It’s very difficult to maintain such a healthy body at the age of 50 and after bearing three children but Jennifer Garner has done it flawlessly.

Garner’s upcoming comedy, Family Leave is about two parents who are doing everything possible to make their family of four work. As their children are growing older and more distant, their family seems to experience the problems that almost every happy-going family sees.

The family then goes to meet an astrological reader who gives them a very weird solution. In order to make their family work, they’ll have to swap their bodies. But the difficult thing is that it’ll happen on the most important day of everyone’s life.

The Walker family members have to experience land a promotion, a college interview, a record deal, and a soccer tryout. And all of this is going to happen on the day they’ll swap their bodies.

The movie will be released on Netflix. Although no release date has been officially out yet, the hard work that the team is doing in production shows that it is not that far.