Jessie J was seen in rare outing with Chanan Colman as she was rocking herself in red swimsuit on the beach! 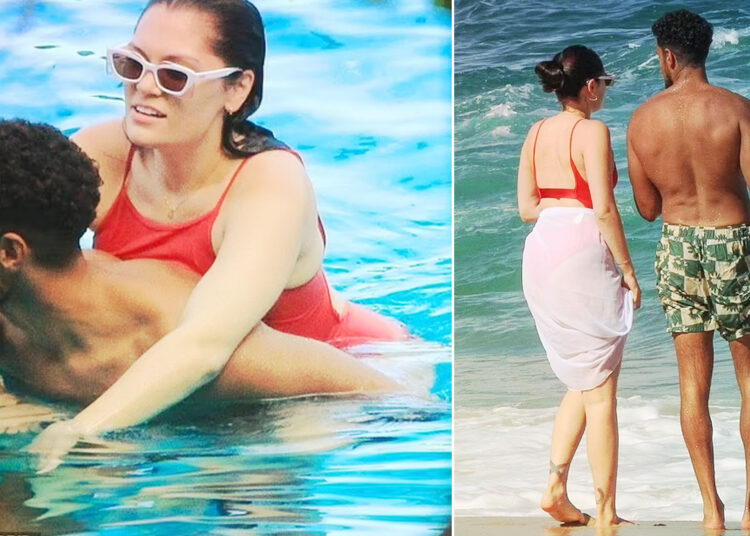 On September 8, Jessie J, 34, and her boyfriend Chanan Colman, 38, relaxing on the beach in Rio de Janeiro. The “Bang Bang” singer took advantage of her day off by relaxing in a hot-red one-piece swimsuit.

In order to shield her eyes from the harsh sun, Jessie J wore a matching set of white sunglasses along with a super-sheer white skirt that she wrapped around her waist.

Jessie donned gold hoop earrings, a slim bracelet, and a quite simple necklace for her day at the beach while also taking some time to splash around in the water.

Jessie J also seemed like she was having fun with her lover! When they shifted from the natural water to the pool for a break, her boyfriend was seen giving the singer a lift. Chanan was spending quality time with his stunning woman when he wore a pair of trendy green trunks with an abstract pattern.

Here you can check out some posts of Jessie J and Chanan Colman.

Chanan and Jessie traveled to the Brazilian beachfront city for the Rock In Rio music event, where Jessie gave a performance that same evening. To commemorate the enjoyable night out, she uploaded a cute video to her Instagram account with the description, “TONIGHT… ROCK IN RIO all my Brazilian heartbeats who can’t be with me in person can watch it LIVE • 9.15 pm I’m headlining the Sunset stage Can’t wait.”

Although the singer performed at the renowned musical festival, she hasn’t actually put out any new music in almost a year. Prior to it, she released the single “One More Try” in 2019, and her song “I Want Love” made its debut in June 2021.

Her hit songs include “Bang Bang,” “Price Tag,” “Who You Are,” and “Domino.” The pop diva from the United Kingdom first gained notoriety in 2011 with the publication of her debut studio album, Who You Are. Countless well-known musicians, including Becky G, Big Sean, Brandy, and rapper 2 Chainz, have worked with Jessie J.

Just three weeks after sharing a tragic baby loss on her Instagram, Jessie J shared pictures from her enjoyable day in the sun. “When I was 16 years old, I prepared a list of things I wanted by the time I was 30. The first thing on the list was to be a Mum,” she wrote in her post on August 18.

Now that I’m almost 35, the pain of losing a kid and the difficulty of having one, along with the desire for my life to look quite different from how it does right now, just overwhelms me some days.