Kendall Jenner was seen in a very unique dress as she was seen leaving the after party of Met Gala 2022! 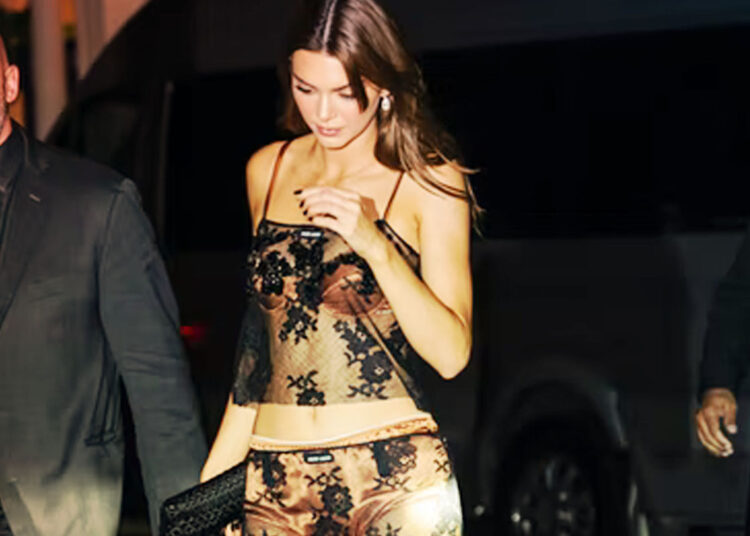 Kendall Jenner is mostly known for her fashion sense but this time her fashion sense was a lot amazing. A lot of fashion events that occurred in the past few weeks defined a new kind of behavior that got represented by the styling of celebrities. Having the proper look at the event and also attending the after-party with again an amazing look is something that only Hollywood celebrities can maintain.

In the past few days, the only fashion event which was highlighted the most was Met Gala 2022. It is not just the Met Gala but also its after-party which was quite highlighted as we have seen a lot of celebrities in fashionable looks. Among them was reality show star Kendall Jenner who was seen wearing a very unique style of dress.

We have seen Kendall Jenner she was wearing a beautiful crop top and long skirt at the Met Gala 2022. But if we talk about the after-party of the Met Gala then she went in a lace dress. It is not the first time that this model has appeared at the Met Gala. The last time was the most amazing for her as she was the most highlighted celebrity at Met Gala 2021. She has attended this year’s event with all her sisters and her mother.

She was seen with black eyebrows instead of dyed ones. After looking at her Met Gala look we can say that it must be the makeup that was applied to the eyebrow.

The model was wearing lingerie by Miu Miu. It hard a satin bra, as well as panty set inside the laced dress. It was covered by a Black lace skirt as well as Black lace top. We have seen her in perfect makeup and at the same time, she has chosen to keep her hair open.

We have seen her sister Kim Kardashian who has revived the look of Marilyn. On the other hand, we have seen her younger sister Kylie Jenner in a white bridal gown. Her elder sister Kourtney Kardashian was seen in some fabrics with her boyfriend Travis. Khloe was there to mark her Met Gala debut with some sparkles while the mother Kris Jenner went with different styling!

Also Read: Olivia Rodrigo Was Seen In Her Purple Dress At Met Gala 2022!