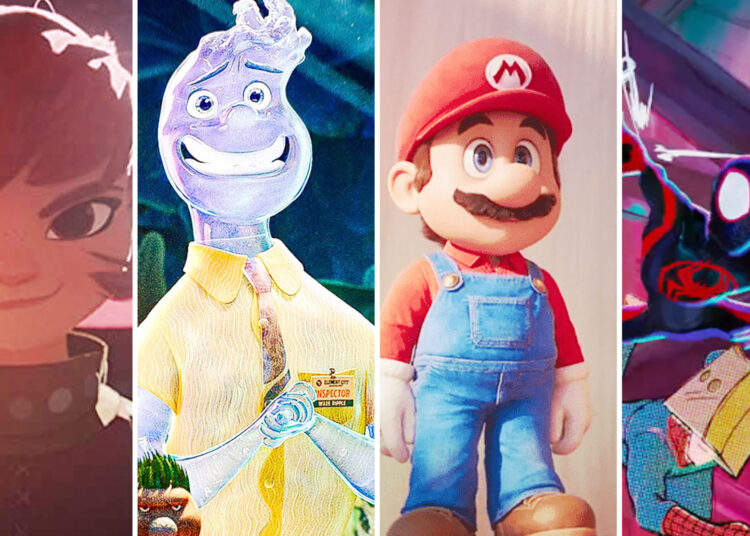 If you like watching animated movies, it’s good news for you as we’ve listed the Top 10 Animation Movies to Watch In 2023.

The year 2022 presented us with animation movies like ‘Pinocchio’, ‘Lyle, Lyle, Crocodile’, ‘My Father’s Dragon’ etc. Following is the list of animated films that are releasing in the year 2023.

Spider-Man: Across the Spider-Verse-

This upcoming computer-animated superhero movie is going to be a sequel to the 2018 movie ‘Spider-Man: Into the Spider-Verse‘ and a part of “Spider-Verse” which is a multiverse of alternate universes.

The plot presents Miles Morales aka Spider-Man and Gwen Stacy journeying through the Multiverse to work together with the group of Spider-Man or the Spider-Force to protect the Multiverse in order to defeat a mysterious villain.

Shameik Moore and Hailee Steinfeld have given voice to the characters of Spider-Man and Gwen in the upcoming movie that is set to be released on June 2, 2023, in the United States.

This upcoming computer-animated fantasy adventure comedy movie is adapted from the same named video game franchise. The plot depicts a plumber named Mario traveling through an underground labyrinth with his brother to rescue a captive princess.

We hear the voices of Chris Pratt, Anya Taylor-Joy, and Charlie Day in the role of Mario, Princess Peach, and Luigi respectively in the movie that is scheduled to premiere in the United States on April 7, 2023, and in Japan on April 28.

The plot of this upcoming computer-animated romantic fantasy movie is set in a city in which residents possessing the elements of fire, land, water, and air live together.

The story is about a fiery young woman named Ember and a go-to-with-the-flow guy Wade who are unable to touch each other but who know how much they have in common.

Leah Lewis and Mamoudou Athie have been cast as voice stars for the roles of Ember and Wade respectively in the movie that is scheduled to premiere on June 16, 2023.

Jeff Rowe has directed this upcoming computer-animated superhero movie that serves as the reboot of the Teenage Mutant Ninja Turtles film franchise and its second theatrical animated installment after the 2007 movie ‘TMNT’.

The plot revolves around four Turtle brothers who have come out after years of shelter in the hope of being accepted as normal teenagers and who, with the help of their new friend April O’Neil, take on a crime syndicate with an army of mutants. The movie is going to be released by Paramount Pictures on August 4, 2023.

The upcoming movie is an adaptation of ‘Miraculous: Tales of Ladybug & Cat Noir‘, the animated tv series. The plot revolves around two Parisian teenagers named Marinette Dupain-Cheng and Adrien Agreste who get transformed into superheroes Ladybug and Cat Noir to save the city.

Cristina Vee and Bryce Papenbrook are voice cast for the roles of Ladybug and Cat Noir in the movie. The film is set to arrive on July 5, 2023, in France.

This upcoming computer-animated sci-fi adventure comedy movie is adapted from the same-named comic series of ND Stevenson. The plot revolves around a teenager named Nimona who has the power of shapeshifting.

After a knight target to assassinate Nimona, he finds his plan thwarted after being accused of a crime from which only Nimona can exonerate him.

Chloë Grace Moretz has given voice to the character of Nimona in the movie that is set to premiere in the United States in 2023.

This upcoming live-action adult animated comedy movie is about an abandoned dog teaming honor other strays to take revenge on his former lover.

Will Ferrell have been cast as the voice star for the role of the abandoned dog, Reggie in the movie? It is scheduled to be released on June 9, 2023.

How Do You Live?-

Studio Ghibli‘s upcoming Japanese animated movie is inspired by the same-named novel of 1937 written by Yoshino Genzaburo. The movie will arrive in Japan on July 14, 2023.

The plot of this upcoming Spanish language action-adventure animated movie is about the king of Uruk named Gilgamesh to defeat whom the Gods create an equal of Gilgamesh named Enkidu. It is set to premiere sometime in 2023.

The plot revolves around the Monkey King’s journey to take back the staff that the Dragon King stole for which he has to defeat his own pride. It will also be released in 2023.