List of most notable Films and TV series in which Academic Award winner George Clooney starred. 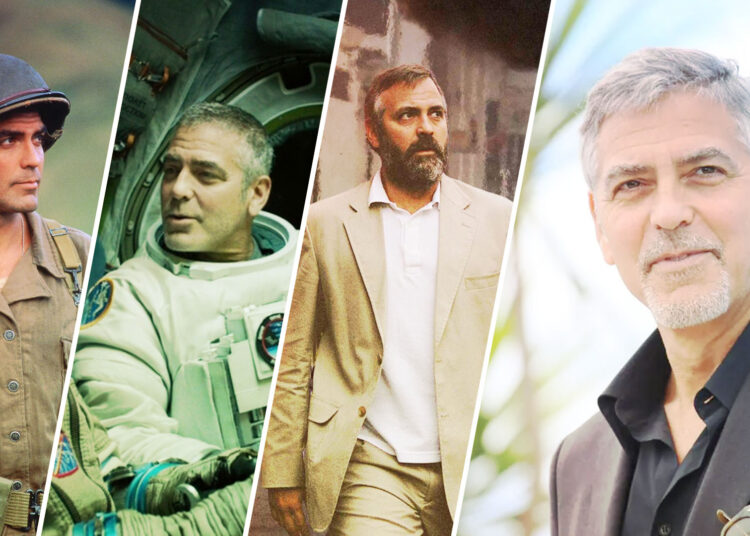 Veteran American actor George Clooney is a successful filmmaker and producer too. He has won a number of prestigious accolades and played numerous roles in many films and tv series.

This article has listed the most notable movies and tv shows in which Clooney has starred.

List of Films in which George Clooney has starred:

This crime comedy movie by Steven Soderbergh marks the first one of a number of collaborations between him and Clooney. Clooney was cast in the lead role of Jack Foley in the movie. It also won an Academy Award nomination.

This is a black comedy war movie starring Clooney in the role of U.S. Army Special Forces officer Major Archie Gates along with Mark Wahlberg, Spike Jonze, and Ice Cube.

Ulysses Everett McGill whose character is indoor from Odyssey is portrayed by Clooney in the movie in which he co-starred with John Turturro.

This is Soderbergh’s heist comedy movie which cast Matt Damon, Brad Pitt, and Julia Roberts in various roles along with Clooney in the role of a former con Danny Ocean who establishes a heist.

The biographical spy film marks the directorial debut of Clooney as he starred in the film too portraying Jim Byrd. Other cast members are Sam Rockwell, Drew Barrymore, and Julia Roberts.

This is a romantic that cast Clooney in the role of Miles Massey in which he co-starred with Catherine Zeta-Jones, Geoffrey Rush, Cedric the Entertainer, etc.

This is another movie directed by Clooney in which he starred too. Clooney portrayed Fred W. Friendly co-starring with David Strathairn, Robert Downey Jr., Patricia Clarkson, etc.

The movie garnered Clooney his first Academy Award nomination as he was nominated for Best Director and Best Original Screenplay in Oscar in 2006.

The role that Clooney played in this political thriller is that of Bob Barnes for which he won the Academy Award for Best Supporting Actor in 2006.

Playing the titular lead role, Clooney starred in this directorial debut of Tony Gilroy as he portrayed a lawyer discovering a coverup over toxic agrochemicals’ effect. Clooney was nominated for Best Actor in Academy Award for this role.

It is a black comedy spy movie that cast Clooney in the role of a womanizing U.S. Marshal named Harry Pfarrer co-starring with John Malkovich, Frances McDormand, and Brad Pitt.

The film secured another Best Actor nomination for Oscar for Clooney as he portrayed the central character Ryan Bingham, a traveling corporate “downsizer” in the movie.

The film is directed by Clooney as he also wrote the screenplay and starred in a character named Mike Morris who is Pennsylvania’s Governor and a presidential candidate for the Democrats. Clooney was nominated for Academy Award in the category of Best Adapted Screenplay for this movie.

This marks the last of the roles winning Clooney Academy Award nomination for Best Actor to date. In this comedy-drama of Alexander Payne, he played an attorney named Matthew King or Matt.

This sci-fi thriller revolves around two scientists stranded in space and attempting to return to Earth. The astronomers are Dr. Ryan Stone, played by Sandra Bullock, and Lieutenant Matt Kowalski, played by Clooney.

List of TV Series in which Clooney has starred:

This is a CBS sitcom in which Clooney acted as a recurring star playing Mark Kolmar who is also known as Ace. He is an ER technician.

In this CBS police drama, Clooney was cast in the lead role of Det. Ryan Walker with Lee Horsley in another lead role.

This is a medical drama series on NBC that deals with the professional and personal lives of the members of the fictional Cook County General Hospital’s emergency room. The role that George Clooney played in the series is of Dr. Doug Ross.