The Nikamma actress Shilpa Shetty always finds to way to shock her fans with amazing outfits. 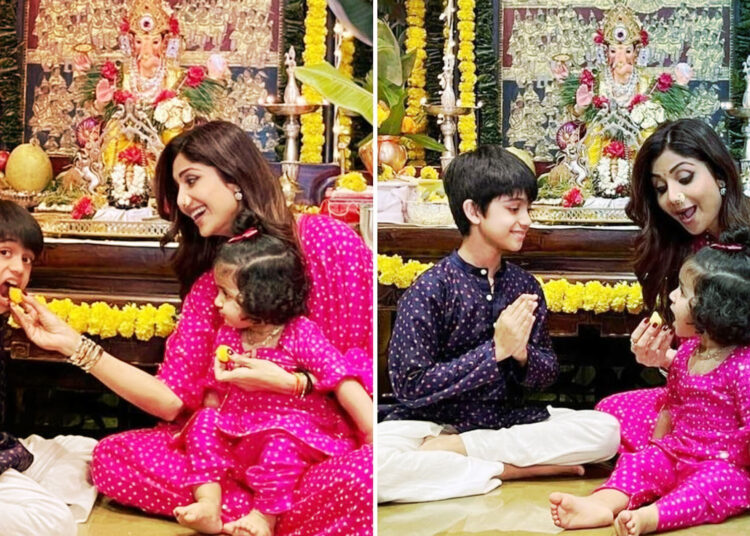 Shilpa Shetty is one of the actresses in Bollywood who celebrates every festival with great joy and enthusiasm, and when it comes celebrating to the iconic Ganesh Chaturthi festival, the joy reaches the next level.

Shilpa has always celebrated this festival with great delight and this year is no different as Shilpa has joined the likes of SRK, Shraddha Kapoor, Alia Bhatt, Kapil Sharma, Kartik Aryan, and many other stars and shared her photos from her Ganesh Puja celebration.

Shilpa enjoys a huge fan following of over 26 million on Instagram and she shares every update with her fans, earlier this week she shared some photos and videos of her Ganesh Chaturthi celebration at her bungalow, her family including husband Karan Kundra, her son Viaan Raj Kundra and daughter Samisha Shetty Kundra were also present on the occasion.

Here you can check out some recent posts of Shilpa Shetty.

The beautiful family was dressed in traditional outfits which included her son and husband in a pink matching kurta and white pajama, her daughter in a cute purple outfit, and Shilpa herself wearing a trendy and classy multi-layered saree, she also put on a nose ring and looked a true Maharashtra chi Mulgi.

Trends come and go but Shilpa’s fashion game is still top-notch as it was earlier in the day, Shilpa’s saree was fresh out of Punit Balana’s shelves, the saree had pink, green, grey, beige, and olive green color shades with a green dupatta, she also put on finger rings, bangles on one hand and a golden Kada on the other, she also wore a choker with heavy design and overall looked phenomenal and it was a treat to watch her in traditional attire after a long time.

Meanwhile, on the work front, Shilpa will be seen in a lead role in a movie titled Sukhee also starring Kai Po Che actor Amit Sadh, she will also make her OTT debut with director Rohit Shetty’s web series ‘Indian Police Force’, starring Sidharth Malhotra, Shilpa will be playing the role of a lady cop role.