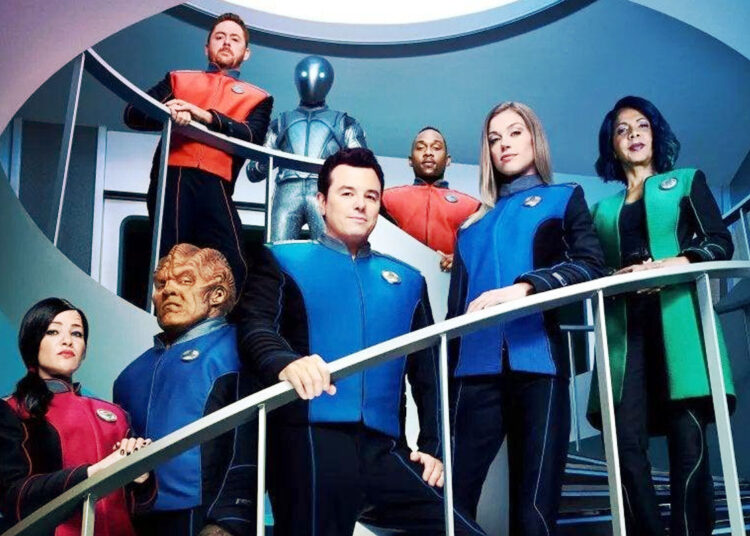 The Orville Season 3 Updates: Seth MacFarlane created the American sci-fi comedy series ‘The Orville’ that is inspired by the ‘Star Trek’ franchise to which it pays homage as well as which it parodies. The plot of the series revolves around a spacecraft- the titular USS Orville’ (ECV- 197). It is a medium-level exploratory vessel situated in the Planetary Union.

The Planetary Union is an Interstellar alliance of the twenty-fifth century consisting of Earth and various other planets. The adventures experienced by the spacecraft’s crew members are featured in the show. Their adventures are generally about exploring planets and parts of the galaxy.

We might get to see a new face in The Orville Season 3.

Seth MacFarlane himself plays the role of the protagonist Captain Ed Mercer in the series. Other cast members include Adrianne Palicki, Penny Johnson Jerald, Scott Grimes, Peter Macon, Halston Sage, J. Lee, etc. The series premiered on September 10, 2017 on Fox. The Orville Season 3 is set to air on June 2, 2022.

Now there are some other series also about the theme of space adventures that you should definitely watch if you are waiting for the newer season of the series to arrive.

Must Watch Series Before The Orville Season 3:

Irwin Allen created this American sci-fi tv series that is the reboot of the same-named series of 1965 which was an adaptation of the novel ‘The Swiss Family Robinson’ that was released in 1812. The plot of the series is set in the future in the year 2046. Before two years an impact event occurred threatening the existence of humanity.

An Interstellar spacecraft named Resolute is carrying out a mission of twenty-four families to be taken over to colonize the Alpha Centauri Planetary System.

For the twenty-fourth mission of the spacecraft the Robinson family is selected. But before they can reach the destination, Resolute’s hull gets breached by an alien robot. Being forced to evacuate the mothership, the family with others crash land on a nearby planet. Now they have to struggle to be adapted to the strange environment of the planet.

Molly Parker, Toby Stephens, Maxwell Jenkins, Taylor Russell, Mina Sundwall, Ignacio Serricchio, and Parker Posey are some of the cast members of the series. It ran from April 13, 2018, to December 1, 2021 on Netflix.

Armando Iannucci created this sci-fi comedy series that revolves around Avenue 5 which is an interplanetary cruise ship. The ship gets off the course due to a moment of loss of the artificial gravity and the unexpected death of the chief engineer.

The members of the ship estimate that they will need three years to get back to Earth but they have only enough supplies in the ship to sustain them for eight weeks.

Hugh Laurie, Josh Gad, Zach Woods, Rebecca Front, Suzy Nakamura, Lenora Crichlow, Nikki Amuka-Bird, and Ethan Phillips are some of the cast members of the series. The series premiered on January 19, 2020, on HBO in the United States and on Sky One in England.

Aaron Martin created this American sci-fi drama series that centers around an unidentifiable flying object which is shaped like a big Mörbius strip. Landing on Earth, the object grows a crystal-like tower on top of it.

United States Interstellar Command or USIC’s employee Erik Wallace tries to establish communication with the alien object. His wife Niko Breckenridge who is a veteran Captain, in order to find out the origin of it, takes Salvare, the space ship.

Her motive is to contact the aliens who sent the object. The spaceship can travel faster than light and can carry most of the crew members as they sleep in the hibernation pods only to wake in their time of need.

Katee Sackhoff, Justin Chatwin, Samuel Anderson, Blu Hunt, Jake Abel, Alex Ozerov, JayR Tinaco are some of the cast members of the series. The series ran from July 25, 2019, to October 14, 2021, on Netflix.

Howard Overman, Kyle Hunter, and Ariel Shaffir created this American comedy series that revolves around a janitor called Josh Futturman building an unbeatable video game name Biotic Wars. But after the completion of the task, two characters of the game – Tiger and Wolf suddenly come out of the game.

They recruit Josh to rescue the world from the actual Biotic Wars. Now all of them have to time-travel in order to change the future.

Josh Hutcherson plays the character of Josh Futturman in the series. Other cast members of the series include Eliza Coupe, Derek Wilson, Ed Begley Jr., Glenne Headly, Haley Joel Osment, etc. It ran from November 14, 2017, to April 3, 2020, on Hulu.

The plot of the series centers on Emma Green (Hilary Swank) who has to leave her family to embark on a dangerous mission to Mars as commanded by an international crew. The series premiered on September 4, 2020, on Netflix.