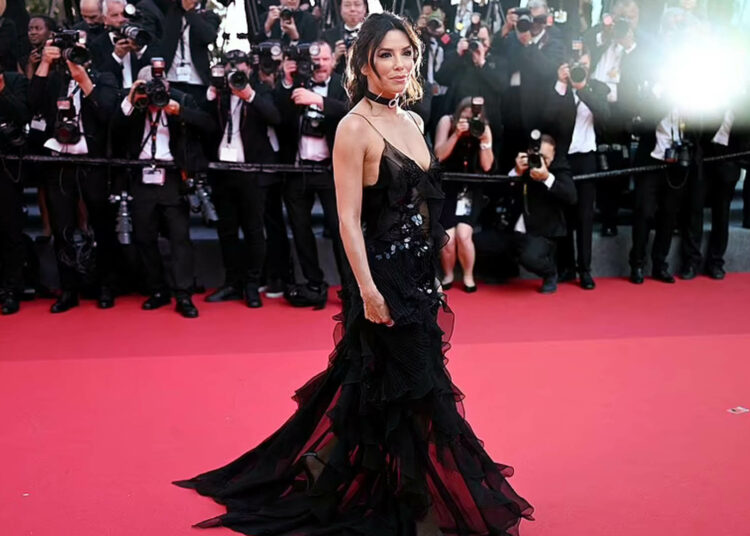 Eva Longoria Scorched The Internet In Her Orange Plunging Dress

Before making her glamorous entry at the dinner, Eva was spotted at the screening of Top Gun: Maverick. The 47-year-old actress became the grist for the gossip mill spruced up in a sparkling off-shoulder gown. It was hard to lay your eyes off the Desperate Housewives fame actress at the screening,

Eva Longoria looked no less than any walking angel in the silver slit dress on the red carpet. Folks, did you know that the 47-year-old actress made her red carpet debut in 2005. During the conversation, the actress spilled the beans over her first debut on the red carpet.

Longoria shared that her first-ever ensemble on the red carpet cost only 40 dollars. Her dress at the event was from the store on Melrose Avenue.

For the unversed, Eva Longoria and Aishwarya Rai Bachchan, the brand ambassador of L’Oreal Paris, share a close bond. The 75th Cannes Film Festival reunited the two and shared a walk together on the red carpet.

Besides Eva Longoria, there was someone else who got all the spotlight. But, of course, we are talking about Eva’s three-year-old son Santiago. Before stepping into the event, Eva shared a picture with her little son on her official Instagram account. The Hollywood actress enjoys a colossal fan following of 8.6 million followers on Instagram.

Here Is The List Of Celebrities Who Celebrated Christmas: Rihanna To Justin Timberlake