Fire Force Season 3 Updates: Enen no Shouboutai is based on a manga series. It is written and illustrated by Atsushi Okubo. It is set in parallel earth that witnessed a catastrophic event known as the Great Disaster. During this crisis, almost the entire world was enveloped in flames.

Tokyo empire remained the only nation to exist after this crisis and the survivors made their way to settle there. 198 years have passed since this event. Shinra Kusakabe is the main protagonist of this story, he joined the Special Fire Force Company 8.

The army consists of pyrokinetics like Shikra. Their main job is to neutralize infernals. This TV anime debuted on July 6, 2019. The latest season concluded on December 12, 2020. Here’s everything we know about the next installment.

Back in 2019, Okubo mentioned in an interview that he had only planned the manga till the 30th volume. Although the plans could change, we don’t know much about it yet. Season 2 ended at the 6th chapter of volume 20.

If the manga ends at volume 30, then season 3 can potentially be the final installment of this show. The publication of volume 30 is set to happen in early 2021. In that case, season 3 can be expected to release in late 2021 or early 2022.

All About Fire Force Season 3

In the season finale of ‘Fire force’ Season 2, Shinra and Arthur train rigorously. Despite that, Shinmon easily wins against them. Shinra gets exhausted to his limit and forms an Alolla link.

Somewhere else, Hibana and Captain of Company 6, Kayoko Huang go to see Konro. They find the latter’s Alolla link still intact and Captain Hague is killed.

Shinmon plans to absorb Company 7 with the rest of the empire. On the other hand, Company 8 gets ready for the upcoming war against the Evangelists.

We can expect to see a battle between the Evangelist and Company 8 in season 3. The war might lead to them being released from the crimes they have been accused of committing.

Also, they might agree to defeating the Knights of the Ashen Flame for good. There can be immediate consequences on the structuring of Company 4 due to the assassination of Captain Hague. There’s a chance that a new captain is chosen to lead that company.

Will we have Fire Force Season 3? – Release Date, Cast and Plot 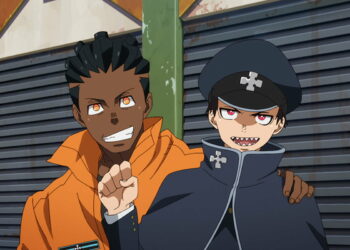