Anushka Sharma Oozes Glam in a Yellow Off Shoulder Top and Denim.

Anushka was last seen in the movie Zero in 2018 and her next film will be Chakda Xpress which is a biography made on retired female Indian cricketer Jhulam Goswami. 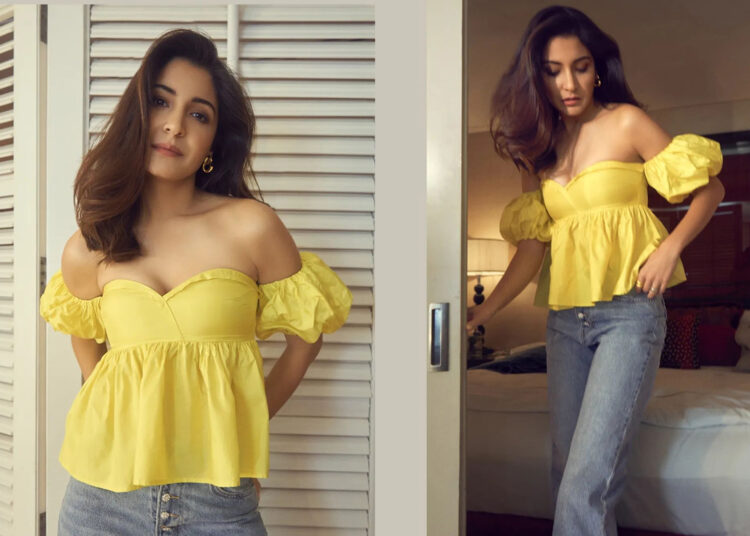 Anushka Sharma is one of the most prominent names in the Bollywood industry. She is among a few actors in Bollywood who came from a normal background and made it big in the film industry with their talent and hard work.

Anushka is 34 now and she has been working in the industry for the past 15 years and has delivered some amazing performances.

She made her debut back in 2008 alongside the biggest star of Bollywood, Shahrukh khan with the movie Rab Ne Bana Di Jodi, the film was a super hit, and Anushka’s performance was hugely appreciated by the film critics.

She then got her second break under the big banner of Yash Raj Films, she starred alongside Ranveer Singh in Band Baja Baraat and the film was a huge success. She then starred in Jab Tak Hai Jaan in 2012 which won her a Filmfare Award for Best Supporting Actress.

Later she did films like NH10, Dil Dhadkne Do, and Ae Dil hai Muskil which were good movies and performed average at the box office. But the best performance of her career came in the record-breaking blockbuster movie PK in 2014, Sultan in 2016, and Sanju in 2018.

Here you can check out some recent posts of Anushka Sharma.

Anushka married cricketer Virat Kolhi in December 2017 and has a daughter named Vamika.

Anushka is one of the highest followed celebrities on Instagram, she has over 62 million followers on Instagram and her posts are just mind-blowing, in a recent one, Anushka Sharma flaunted her s*xy side by wearing a yellow off-shoulder top with blue denim and she looked absolutely ravishing flaunting her chiseled beauty bones and perfect figure.

Anushka was last seen in the movie Zero in 2018 and her next film will be Chakda Xpress which is a biography made on retired female Indian cricketer Jhulam Goswami. The film will be released on Netflix and it will be Anushka’s long-awaited return.