The couple Athiya Shetty and Kl Rahul has been dating for 4 years and their marriage reports were trending for the past several weeks. 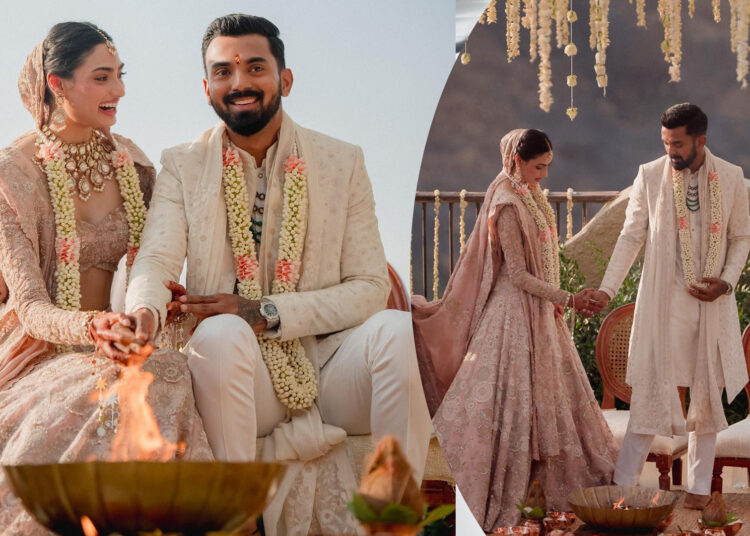 The cricket world and the Bollywood industry have lighted up and there is a big reason to celebrate, popular Indian cricketer KL Rahul and Bollywood actress, Athiya Shetty who is the daughter of veteran actor Suniel Shetty have finally tied the knot for seven lives, the couple has been dating from past three-four years and finally decided to get married in a private ceremony.

The marriage event was quite lowkey and very close family members and friends were invited, the event took place at Suniel Shetty’s Khandala house and the guests included cricketer Ishant Sharma, Varun Aaron with their respective wives, Bollywood well-knowns like Diana Penty, Aditya Seal, Krishna Shroff were also present at the marriage ceremony.

Here you can check out some pictures of Athiya Shetty and Kl Rahul’s Marriage Ceremony.

Other events like Mehendi, Haldi, and Sangeet were started last week and the final wedding took place on Monday the couple gave their first media appearance on Tuesday outside the venue. Suniel Shetty attended the media and paparazzi and talked about the reception dates.

Several beautiful images surfaced on the internet from the marriage ceremony and the couple looked absolutely adorable, Athiya looked heavenly beautiful in a blush pink chikankari lehenga embellishments and embroidery from top to bottom along with full sleeves blouse, reportedly it took 10,000 hours for the designers to complete her lehenga which was picked by designer Anamika Khanna, on the other hand, KL Rahul looked handsome in an ivory sherwani.

Both Rahul and Athiya Shetty shared beautiful posts from their marriage on Instagram and penned beautiful notes for their fans and well-wishers.

The couple looked absolutely made for each other in the pictures and fans and celebrities bombarded their post with likes and comments, from popular cricketers like Hardik Pandya and Virat Kohli to popular Bollywood celebs Katrina Kaif, Deepika Padukone, Anushka Sharma, and several others congratulated the couple on their post.