Billie Eilish was seen in a new style as she was wearing topless printed t-shirt! 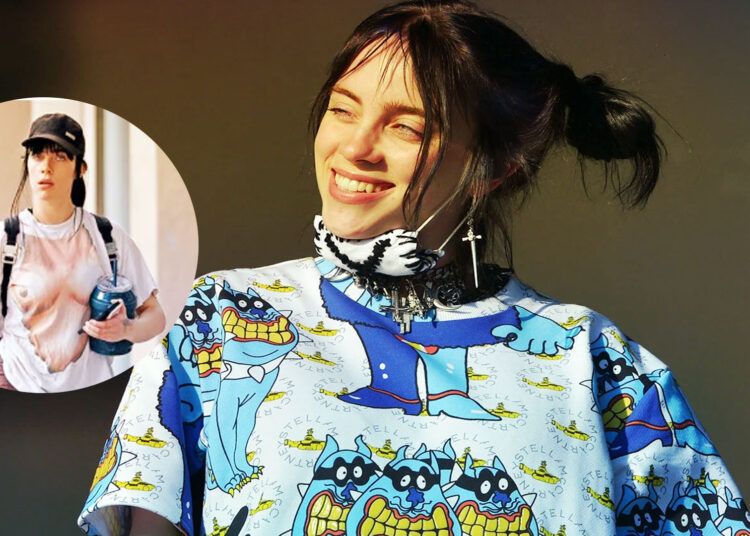 Billie Eilish was recently seen wearing a topless t-shirt print while heading toward the gym. We have seen a lot of celebrities maintaining a look that appears to be different from others and unique.

Whether it is related to gaining casual outfits or just any designer cloth that they have chosen and for any events.

Whatever it is, it just becomes a trend and is followed by many other people like their fans. If we talk about any recent trend that become quite common among celebrities then it is a t-shirt or dress with a topless print.

The same happened with Billie Eilish as she was seen going to the gym while adopting this look. The 21-year-old singer was looking very casual while wearing a graphic of n*ked boobs on her t-shirt.

Here you can check out some pictures of Billie Eilish Out site the Gym.

With this, she has matched a pair of brown shorts while walking outside the gym. To complete the lock, the singer has also adopted a black baseball cap while keeping her hair tied up in a ponytail.

The white sneakers of Billie Eilish were also matching with the white socks as she headed with a black bag and a big water bottle in her hand.

With this gym look, it was sure that the singer was make-up-free and her beauty was on the display. Instead of going with no smile, the singer has decided to keep a bright smile on her face while looking at the camera.

Here you can check out some recent posts of Billie Eilish Making Headlines.

It was recently when Billie Eilish made headlines related to wearing a slip dress that was tight and uploaded it on Instagram.

With the photo, one can say that she was in a bedroom and kept her hair down. Soon, a lot of fans started commenting and posting it on their account while appreciating her look.

If Billie Eilish is not getting headlines through her outfits and photos then she makes sure to get it with her interviews. She has recently opened up about the struggles in her teen years where she talks about hating herself.

A lot of people have shown their anger towards her body and the same she did to herself. Because of this it has caused her a lot of pain and lost a lot of things in her life.

The singer has also talked about suffering a plate injury in her hip only just at the age of 13. Because of this incident, her only dream of becoming a dancer was taken away.

But at the same time, music came into her life and replaced her dancing and now we know that she is really a great singer.