Evan Peters is no stranger to award ceremonies; in the past, he has been nominated at events like the Critics' Choice Television Awards, the Saturn Awards, the Satellite Awards, and the Primetime Emmy Awards. 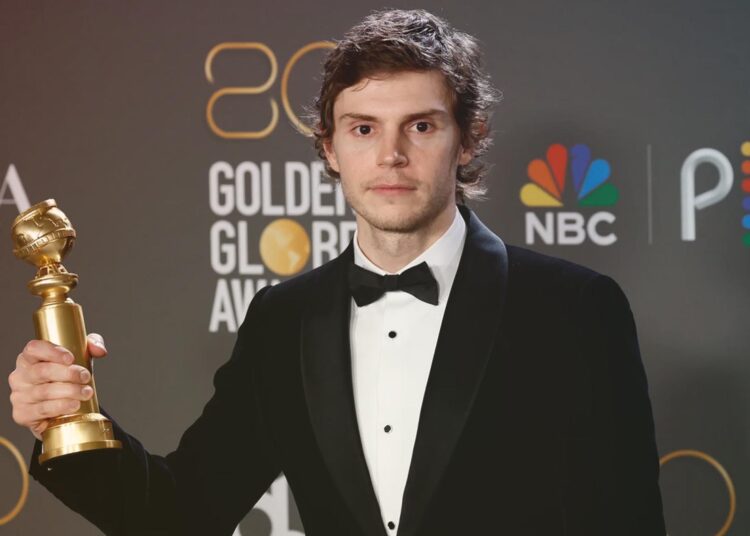 Evan Peters Wins the Golden Globe for Netflix Dahmer. For the details below.

On Tuesday night, NBC hosted the 80th annual Golden Globes Awards. The winner of the award for Best Performance in a Limited or Anthology Series or Television Film was just announced.

Evan Peters was able to take home the trophy thanks to his portrayal of Jeffrey Dahmer in Dahmer – Monster: The Jeffrey Dahmer Story, which was released on Netflix. He thanked everyone for watching as well as those involved in the event for the experience in a succinct victory speech.

Given his terrifying and well-received portrayal of the notorious serial killer in Dahmer, Peters was widely expected to receive the award. However, Peters faced strong competition, and nothing was guaranteed.

If you want to know more about Even Peters and about his life, then read this article all the way to the very end. As, here in this article, we will discuss everything related to Evans Peters winning Golden Globe.

Evan Peters Was Nominated For The First Time

Evan Peters is no stranger to award ceremonies; in the past, he has been nominated at events like the Critics’ Choice Television Awards, the Saturn Awards, the Satellite Awards, and the Primetime Emmy Awards. But prior to the release of Dahmer – Monster: The Jeffrey Dahmer Story, the actor had not yet received a Golden Globe nomination.

In addition to Peters, other notable first-time nominees at the ceremony were Zendaya, Selena Gomez, Quinta Brunson, Austin Butler, Ke Huy Quan, Emma D’Arcy, Barry Keoghan, and Jenna Ortega from the popular TV show Wednesday. Peters was nominated against a number of actors who had already won Golden Globes. However, Peters claimed victory in the competition.

Who Is Evans Peters?

Evan Peters is an accomplished American actor who has worked in both film and television. Popular television programs, including “Phil of the Future” and “Invasion,” featured him in supporting roles. He has also acted in a number of movies, including “X-Men: Days of Future Past” and its follow-up, “X-Men: Apocalypse.” Peters, who was born in St. Louis, Missouri, in the United States, has always wanted to be an actor.

He pursued modeling while simultaneously enrolling in acting classes near his home. He played his debut acting part in the drama film “Clipping Adam” in 2004, for which he was honored with the “Phoenix Film Festival” award for “Best Breakthrough Performance.” I

n addition to his roles in movies and television shows, he has, during the course of his career, made guest appearances in a number of television advertisements, including those for “Sony PlayStation,” “Progressive Insurance,” “Papa John’s Pizza,”  “Moviefone,” and “The Kellogg Company.”

It was in 2011 when he made his debut in the anthology horror TV series ‘American Horror Story,’ which is now widely considered to be his most significant work to date. His performance in the series has received favorable reviews. Additionally, as a result of it, he has been considered for a number of different accolades.

Soon after, he uprooted his life and headed out to Los Angeles in the hopes of launching a career in acting. After that, he enrolled in ‘Burbank High School,’ but he left the school after a short time and began homeschooling instead.

About The Series Dahmer – Monster: The Jeffrey Dahmer Story

Dahmer – Monster: The Jeffrey Dahmer Story premiered on Netflix on September 21, 2022, and is the first season of the American real crime anthology series Monster, developed by Ryan Murphy and Ian Brennan. Along with Brennan, Murphy co-executive produces the show and serves as the showrunner.

The notorious serial killer Jeffrey Dahmer, known for necrophilia, cannibalism, and keeping leftover body parts as mementos in his freezer, is shown in Monster: The Jeffrey Dahmer Story, which recreates his heinous life and deeds. A horrifying replica of Dahmer’s manner of hanging his arms is provided by Evan Peters, who plays the role of Dahmer in the film.

It doesn’t matter if it was the reproduction of Dahmer’s apartment, specifics drawn from Dahmer’s prison letters, or the nearly verbatim family statements during the concluding court scene, Monster’s veracity is possibly its most potent component.

Although it was met with a variety of reactions from critics, the Netflix original documentary Dahmer was a commercial success and quickly rose to the top spot on the streaming service after its initial debut. Within 28 days, it rose to the position of the second-most watched English-language Netflix series of all time and became the third Netflix series to surpass 1 billion views in 60 days.