Eddie Murphy Jokes About Will Smith At Golden Globe Award!!!

Murphy, who is 61 years old, was presented with the Cecil B. DeMille Award on Tuesday night at the 80th annual Golden Globes ceremony. 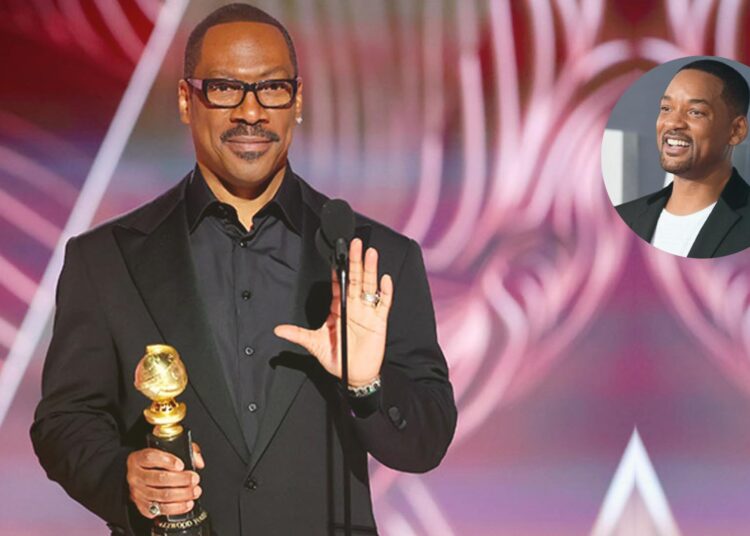 The Hollywood Foreign Press Association (HFPA) chose the winner of the 80th Golden Globe Awards, which honored the year’s most outstanding achievements in film and television in the United States. The event took place on January 10, 2023, in California, at The Beverly Hilton in Beverly Hills. It was broadcast live across the United States by NBC and streamed online by Peacock.

Eddie Murphy, a renowned comedian who was honored at the 2023 Golden Globes with the coveted Cecil B. DeMille Award (which is given in recognition of lifetime achievement), was able to work in a below-the-belt punchline about actor Will Smith‘s notorious Oscar slap.

Moreover, due to Eddie Murphy’s jokes about Will Smith, this year’s Golden Globe Awards ceremony is trending on Twitter. So, if you are curious to know all about the fact related to this, then this article is all the way to the very end.

Eddie Murphy Jokes About Will Smith At Golden Globe Award

Eddie Murphy cracked a punchline about the Will Smith Oscars slap at the 2023 Golden Globe awards. In addition, Eddie Murphy recently became a trending topic on Twitter as a result of a joke he made about Will Smith when receiving the Cecil B. DeMille Award at the 80th Golden Globe ceremony.

Murphy, who is 61 years old, was presented with the Cecil B. DeMille Award on Tuesday night at the 80th annual Golden Globes ceremony. At the end of his acceptance speech, Murphy stunned the crowd with a joke about the incident that occurred at the Academy Awards the previous year, when Will Smith punched Chris Rock onstage in response to a comment Rock made about Smith’s wife, Jada Pinkett Smith.

Murphy made fun of the infamous Oscars 2022 incident in which Smith slapped Chris Rock on stage for making fun of Jada Pinkett Smith’s shaved head. Soon after the slap, Will Smith returned to his seat and asked Rock to refrain from mentioning his wife.

The incident with the slap sparked outrage on social media and quickly gained notoriety as one of the most iconic moments in Oscar history. Additionally, it resulted in Will Smith’s resignation from the Academy and a 10-year Oscars ban. The actor has issued an apology for his behavior since the incident occurred.

Eddie Murphy’s joke, nevertheless, divided the internet, with some praising his comedy and others expressing displeasure at the continued usage of Will Smith gags almost a year after the Oscars slap incident. Jerrod Carmichael, the host of the Golden Globes, also made a joke about Smith in addition to Murphy.

Who Is Will Smith?

Will Smith is an incredibly well-known American actor who got his start in the entertainment industry as a rap artist. He began his career by collaborating with the turntablist DJ Jazzy Jeff and the beatboxer Ready Rock C. It was well known that he was a brilliant student who had attended ‘Overbrook High School’ in Philadelphia.

However, he made the decision not to continue his education at a university so that he could concentrate on a career in music instead of attending college.

In addition to winning a Grammy Award, he enjoyed a lot of success in his career as a singer. At the age of 25, this young actor made his film debut in the well-known film “Six Degrees of Separation.” There was no turning back for this gifted young star from that point on. His performances, which are always filled with strength, demonstrate his flexibility and give hope that this star will be around for a long time.

The actor was seen as a breath of fresh air by many filmmakers, and he played emotional characters with the same degree of ease as he did heroic roles.  One of his many excellent movies, the sci-fi comedy “Men in Black,” was a smash hit with moviegoers all over the world.

The ‘Men in Black sequels, which received praise from both fans and reviewers, were inspired by the success of the first film.

Who Is Eddie Murphy?

Eddie Murphy, whose full name is Edward Regan “Eddie” Murphy, is an American comedian and actor who is famous for his sharp sense of humor and his ability to play comedic roles. Eddie began his career by performing stand-up performances in front of his friends because he has always had a love for comedy.

He was a bright, aspirational youngster with a funny demeanor. His big break came when he was cast as a comedian on a television program. He has received numerous honors and awards for his outstanding work in both movies and television.

Due to his numerous connections with women, Eddie’s personal life has received almost as much attention as his career. However, Eddie has captured many hearts with his accolade-winning performances and motivational character portrayals in movies. He has gained acceptance and admiration for his pleasant performances all across the world.