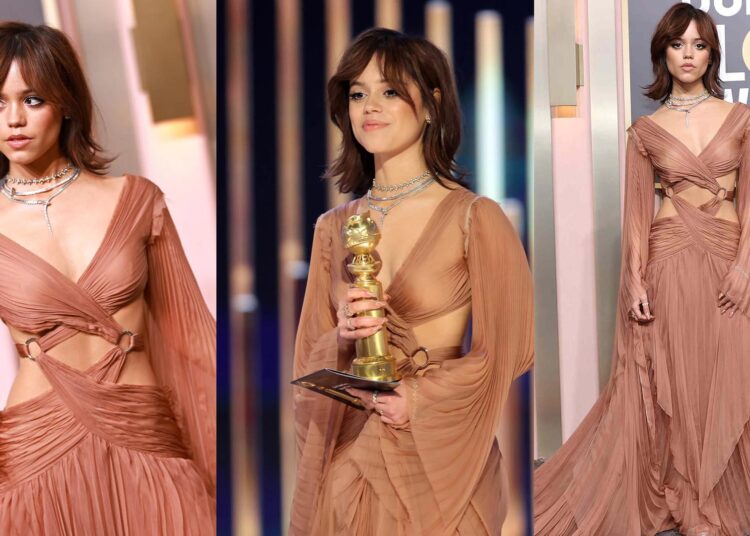 Jenna Ortega showed off her abs while wearing a sheer dress of Gucci. We have seen how celebrities try to adopt great fashion in great events with amazing red-carpet appearances.

Golden Globes 2023 has been given some amazing styles by celebrities who maintained the best of themselves on the red carpet.

Among them was the actress Jenna Ortega who is known for her role on Wednesday. The actress Jenna Ortega was looking beautiful as ever on the red carpet of the 2023 Golden Globe awards that happened on 10 January 2023. The 21-year-old actress was looking stunning while wearing a sheer coffee dress. She has definitely defined that at an early age, she is ready to rock the world of fashion.

Here you can check out some pictures of Jenna Ortega from the Golden Globes 2023.

Coming to her appearance then it was related to her nomination for the Best Television Actress in the Musical or Comedy categories. And that’s the reason why it was very appropriate for her to give an amazing red carpet appearance however, it was different from her character on Wednesday. She was wearing an off-shoulder dress with big sleeves and many cutouts.

Her hair was done beautifully and her makeup was also on point. She has even carried an amazing necklace and heels to maintain her look while posing very appropriately for the camera. It was one of the dreamy looks of any person and especially for her character on Wednesday.

Jenna Ortega has suddenly got all appreciation related to her acting from her series called Wednesday. The question related to Wednesday season 2 was asked then the actress said she does not know and she has seen nothing of it. It seems like the script is not ready and it depends upon the writer to put it together for season 2.

Coming to the other carpet appearance, apart from Jenna Ortega we have seen many other celebrities coming for the red carpet. Salma Hayek also attended in surreal mermaid attire. She was also sporting Gucci, which was a coffee-colored dress with a silver jewel wrapped around it from the inside out. She had her hair tied back and just wore earrings as jewelry.

With a crimson outfit, Lily James was slaying the red carpet. On January 10, 2023, she made an appearance in Los Angeles wearing a massive red gown with a long train. The actress had open hair and was sporting a necklace.