Rita Ora Was Seen In Cream Bikini After 4 Months Of Marriage!

The singer Rita Ora was seen in a hot look coming with bikini as she was ready to pose! 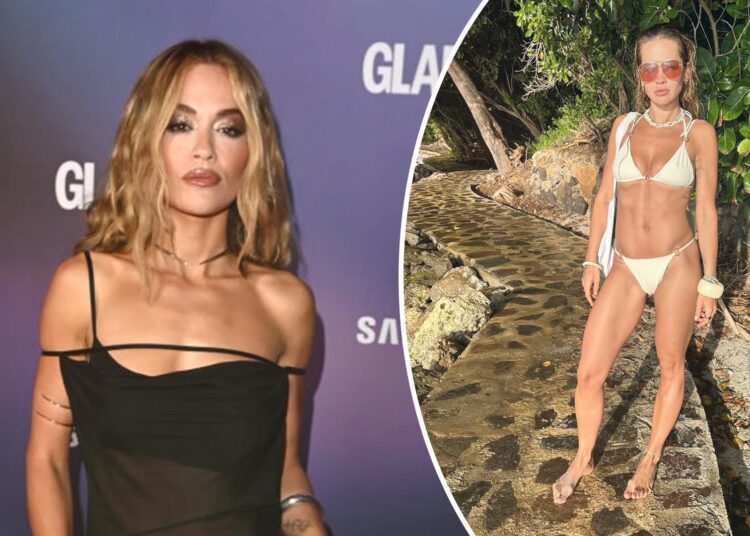 Rita Ora was seen in a cream bikini, 4 months after she got married. It happens with celebrities how their life changes after marriage however, most of them remain the same in terms of their fashion as well as their personality.

Whether it is related to carrying any look that goes according to the way they have pulled before marriage or the choice of work they are having. Everything fits well in their life as per their wish. If we talk about such things then a lot of celebrities got married in 2022 and are enjoying their married life as same in 2023.

Something like this happened with the amazing singer Rita Ora as she was seen in a cream bikini while spending time in Saint Barts. The singer has shown off her bottom and the top that was designed by Stella McCartney. It all happened through an Instagram page that shared some pictures of the actress.

Coming to the real photos then the singer herself shared them on Instagram on 6 January 2022. She has uploaded a series of 6 photos, all of which were related to her look and the ocean. In the first picture, Rita Ora was seen wearing a cream bikini bottom and wearing red sunglasses. She was carrying a bag with a printed nude body of a woman and held it in front of her body.

Also Read: Kim Kardashian Is So Caring And Loving With Her Kids And Family!

Here you can check out some posts of Rita Ora.

In the next picture, one can easily get the whole look of Rita Ora and her abs. She was standing without any footwear and looking straight at the camera. Her bikini top was on display while she was standing in a great pose to take pictures. For the next photo, she continued the same look but with a different pose, and later on, she uploaded a picture of water and sand.

Soon as the singer uploaded these pictures, a lot of comments started flooding. Some of them called her a beauty while others decided to appreciate her with emojis. Coming to her love life then she got married to her husband Taika Waititi who is a 47-year-old man as soon as they started feeling serious about each other.

They both secretly dated and also got married secretly in August 2022. Their dating life existed for more than a year as they were linked since the early months of 2021. The marriage happened in London England as it was just confined to some close friends and family. According to the source:

“Their nearest and dearest can see how madly in love they are. Despite living in the spotlight, Rita is determined to keep the relationship as private as possible and didn’t want to make a big song and dance about the wedding.”