Evil Dead Rise Official Trailer: The Deadite Horror Is Coming with a Vengeance!

The first horrifying trailer for the highly awaited horror thriller Evil Dead Rise has been released, with both green and red band versions available. 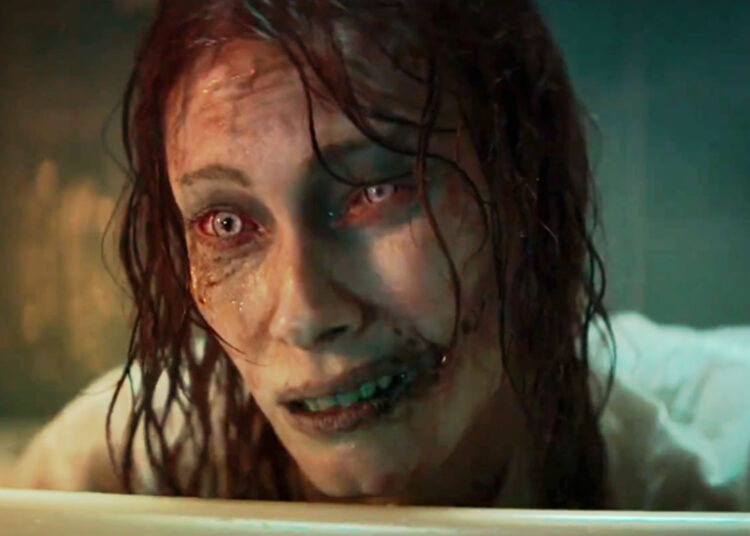 The first trailer for Evil Dead Rise has arrived, not a moment too soon. It’s been a decade since Fede Alvarez released a darker & grittier version of Evil Dead, and we’ve been yearning for more Deadites ever since.

Ash vs. Evil Dead was entertaining, but we missed the blood flowing off the screen. Fortunately, the trailer for Evil Dead Rise promises that the film will be as bloody as our darkest nightmares. There’s a lot to understand in the new red band trailer, so let’s start the discussion.

The green band trailer is supposed to be more suitable for all ages, although it is still very graphic and frightening. Ellie, her children, and her sister Beth are first seen together in the red band trailer for Evil Dead Rise.

Ellie gets possessed by a demon and recalls a horrible dream. Before the Warner Bros. Discovery logo appears, there is a scalping, offering viewers a taste of how brutal this film would be.

The blood-soaked trailer teases viewers with chainsaw attacks, cheese-grater mutilations, and more violence than any horror fan could wish for. This can be the most intense, visceral, and terrifying mainstream horror film of 2023.

The two trailers have part of the same video, but there is a lot of unique content, so fans should view both for a complete picture of Evil Dead Rise.

Evil Dead Rise retells the classic horror story in a new setting, unleashing the dead on the city. So far, three of the Evil Dead films have been set in cabins in the woods, a trademark of the horror genre. The third installment, Army Of Darkness, took Ash Williams to the Medieval Era.

Beth eventually pays a visit to her elder sister Ellie, a mother of three who lives in the city. However, the sisterly reunion is shattered when the Necronomicon is found deep within their apartment building.

The Culprit Is Necronomicon

The new trailer for Evil Dead Rise reveals what is behind the current Deadite outbreak. The culprit, as predicted, is the Necronomicon, a cursed book of human flesh engraved with human blood.

The book contains many wicked spells, including those that can create gates to hell and summon demons to Earth.

When she visits her sister, Beth will discover more than just the Book of the Dead. Along with the book, Beth will obtain access to an ancient record containing Professor Knowby’s Necronomicon rites.

Professor Knowby is the scholar in charge of recording the rite used to unleash the Kandarian Demon, the creature responsible for converting individuals into Deadites.

Every Evil Dead film needs a hero. It’s now up to Beth to take up the role of Deadite-slayer. While we have a new hero, the trailer pays homage to the previous trilogy by showing Beth rushing in a blood-splattered hallway, her eyes wide open in madness.

Evil Dead Rise’s red band trailer adds another promise by showing Beth holding the chainsaw. Beth isn’t the only blood-soaked survivor in the clip; Ellie’s youngest daughter appears to be among the final ones standing.

Perhaps Evil Dead Rise will usher in a new golden age for the franchise by making Deadite hunting a family tradition.

How do “ordinary people” deal with a demonic invasion? Find out when the film will be released in theaters on April 21, 2023!