After her breakup with Gerard Pique, Shakira shared a positive message on the healing process, saying, "In the Midst of Heartbreak We Can Continue to Love." 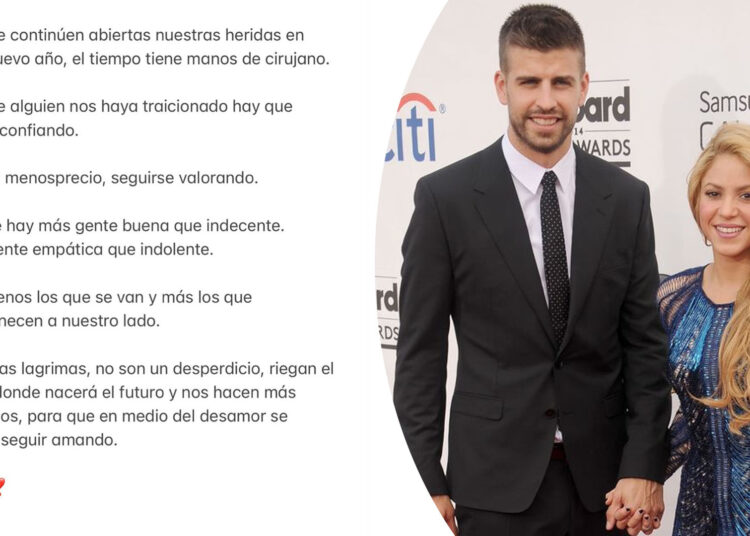 The 45-year-old diva Shakira best known for her hit “Wherever, Whenever” composed a statement on moving on with one’s life after experiencing betrayal on the first day of the new year.

She sent the following message on Instagram in Spanish: “Although our wounds continue to remain open in this new year, the time has surgeon’s hands.”

Even when someone has deceived us, we must continue to trust others. The statement, which has been translated, continues by saying, “Continue to value yourself, even in the face of scorn.”

Because there are a more significant number of sound individuals than nasty ones. Persons who are more empathic than those who are passive. Fewer people decide to quit, and more remain by our side.

Shakira summarised her thoughts by saying, “Our tears are not a waste; they nurture the soil where the future will be born and make us more human so that even in the middle of pain, we can continue to love.”

Only six months have passed since the news of her breakup from Gerard Piqué became public, and she has already declared that she would continue to love “in the middle of pain.”

The Colombian native and the athlete, who was 35 then, said in a joint statement distributed by Reuters in June 2022, “We regret to announce that we are separating.” We ask that you respect our children’s privacy so they may continue having a healthy and happy childhood, which is our top priority.

The Couple Shakira and Gerard Pique started Dating in 2011.

The couple, who started dating in 2011, made headlines earlier this month when claims emerged claiming that Shakira saw the professional athlete having an affair with another woman.

During that period, they did not respond to the allegations. In an interview on the cover of Elle magazine in September 2022, the singer of “Hips Don’t Lie” said, “it’s been challenging not just for me, but also for my kids.”

“A challenging endeavor. I have been trying to keep the issue a secret from my children. Because accomplishing this goal and ensuring their safety is my top priority, I make every effort to fulfill it.

Before they called it quits, the judge from Dancing With Myself and Piqué became parents to their sons Milan, now nine years old, and Sasha, now seven years old.

Even though they had been together for more than a decade, the couple chose not to be married. In November 2022, A report verified that the couple had reached a custody arrangement for their child. During this challenging time, the Grammy Award winner has been putting her children’s needs first to put a positive spin on the situation.