Kim Kardashian slayed again with amazing fashion of crop top as she enjoyed time with her kids! 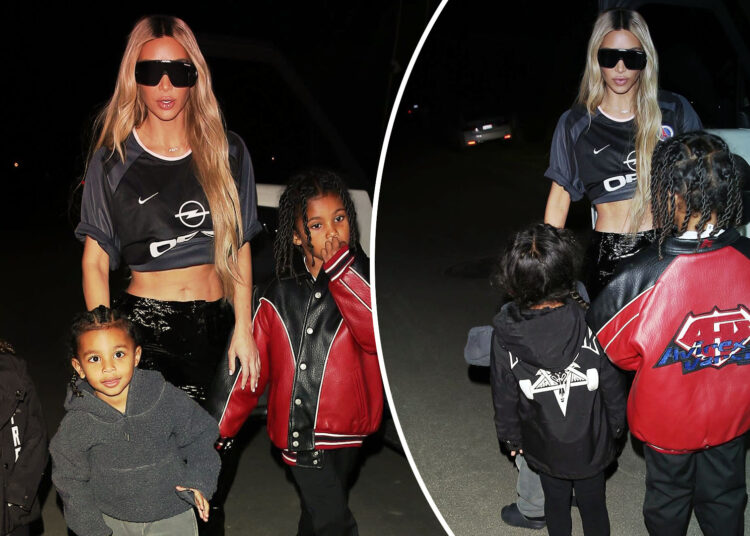 Kim Kardashian was seen wearing crop tops while taking her kids for dinner. Whether it is related to normal work or attending any event, we have seen celebrities in the best of their fashion.

If we talk about such things then we cannot forget about some celebrities who were known for their look which comes with comfortable and beautiful. Something like this recently happened as Kim Kardashian stepped outside in a crop top with her children for dinner.

Reality stars never leave a single day to spend with their children. And that’s the reason why she has always given priority to them over anything.

It’s been already many days since Christmas and now she was seen stepping out for dinner for the first time after it. The 42-Year-old was seen at Crossroad kitchen with three of four children.

Coming to fashion then Kim Kardashian was wearing a black crop top t-shirt with leather pants and matched it with excellent shades. Her blond hair was waving on the shoulder while she was holding the hands of her children.

Coming to the children then 7-year-old Saint was there with Chicago who is 4 years old. Psalm was also there who is 3 years old joined by their mother and siblings.

Here you can check out some pictures of Kim Kardashian from her little outing with kids.

They are all over without the eldest daughter of Kim Kardashian and Kanye West is North. But when it comes to her look then she was already looking amazing in previous days.

Saint was wearing a red and black leather jacket that was coming with black pants. He was also seen in sneakers while going with Chicago. Chicago was all black and Psalm was having matching pants and hoodies.

This article’s appearance came after Kim Kardashian and the whole family celebrated Christmas together with sisters and their children. Coming to the look of Kim Kardashian then she was seen in a silver gown that was looking amazing and sparkly. It was matching themes of the party.

2022 has been a hectic year for Kim Kardashian as she has gone through a lot. Whether it is related to the controversy of Kanye West that has surrounded her throughout the whole year or the divorce finalization.

Everything related to the rapper has become a somewhere chaotic situation in her life. And that’s the reason why she was not able to cope well with her relationship.

Kim Kardashian dated Davidson for 9 months with soon they both broke up due to certain reasons which the drama of Kanya West might be one of.

They both were quite busy with their schedule and wants to give each other time. Even after breaking up, they have nothing but good relationships with each other and that’s the reason why they don’t have any kind of sayings or words related to it.