The Honor Magic Vs. was introduced on November 22 for the mainland Chinese market and is currently available. 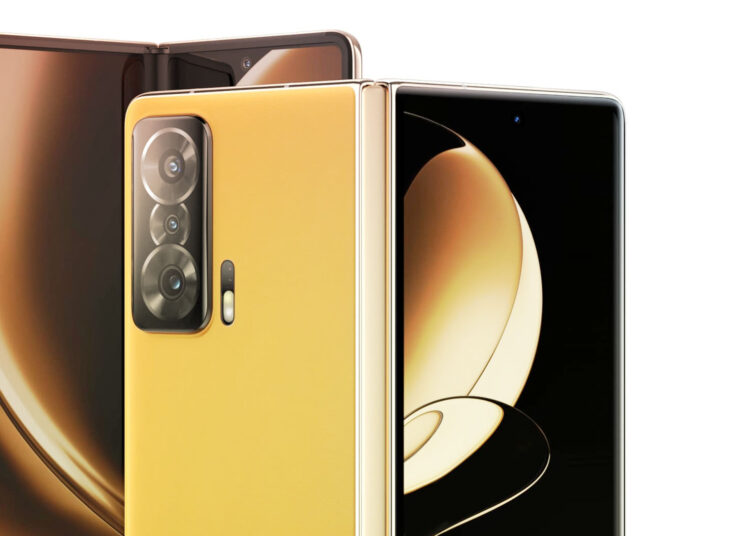 Honor Magic Vs has a massive display on the exterior and a larger one on the inside, making it a large phone.

However, it is slim for a device of this sort, making the phone seem less bulky than you might imagine. In addition, because there is no gap around the hinge, the phone is of constant thickness throughout.

As a result, it is not as broad at the spine as Samsung’s. It also seems solid due to the rugged metal frame around the edges and a titanium alloy hinge that appears to open and close quickly on first impressions.

The front display has a large 6.45-inch panel closer to a typical smartphone aspect ratio. It’s not precisely 18:9, but at 21.3:9, the size and aspect ratio will make it seem much more spacious than the competition.

The interior display is about 8 inches and has a vast surface area. It has a specific anti-reflective coating to help avoid one of the most common issues with plastic-covered screens: reflections.

Furthermore, the hinge design conceals the crease in the center of the screen when the screen is turned on. HDR10+ capabilities, 90Hz refresh rates, and a brilliant, colorful OLED display are all included.

Honor Magic Vs Price and Availability

The Honor Magic Vs. was introduced on November 22 for the mainland Chinese market and is currently available. Prices range from $1,067 for the base 8GB RAM, 256GB storage model, to $1,260 for the top 12GB RAM, 512GB storage model.

Honor has announced that the device will be available outside of China in Q1 2023, but there needs to be more information on the precise date or pricing at this moment.

Performance of Honor Magic Vs

Internally, everything is in place to achieve flagship performance. On paper, at least. That implies the Snapdragon 8+ Gen 1 processor is in control, which should mean incredibly speedy and efficient performance if it’s anything like the previous phones.

It’s accompanied by 8GB or 12GB of RAM and 256GB or 512GB of storage. That means enough Memory for fast performance and plenty of storage space for files, media, and apps.

Battery life of Honor Magic Vs

Despite the weight reduction, the Magic Vs. has a bigger overall capacity dual battery design than its predecessor. There is no wireless charging, but the phone’s 5,000mAh battery can be recharged to 100 percent in 46 minutes using the company’s 66W SuperCharge technology.

The camera of Honor Magic Vs

A 50-megapixel primary camera with a vast Sony sensor produces high-quality photographs with loads of detail, dynamic range, and color.

The primary lens is joined by two secondary lenses: an ultrawide and a macro. Again, that’s 50 megapixels, so Honor still needs to settle for a worthless low-resolution macro camera. When you combine a 3x optical zoom telephoto camera with an 8-megapixel sensor, you have a wide range of focal lengths to suit most situations.

Honor thinks that the Magic Vs. ‘s price/performance combination will be enough to convince interested consumers that this is the foldable they can live with, as it appears to be more affordable.

With an ‘only’ 90Hz refresh rate on the Vs. ‘ primary display, a lack of IP-certified protection against dust and water intrusion, and pen compatibility limited to an exclusive edition that appears destined to remain a Chinese-only release for the foreseeable future, there’s a clear possibility for improvement.

Regardless, this initial interaction with Honor Magic Vs. Shows promise and demonstrate that the firm is eager to push the edge and compete with the biggest and finest foldable on the market.