Megan Fox has received many awards and recognitions for her acting skills, which include four Teen Choice Awards and two Scream Awards. 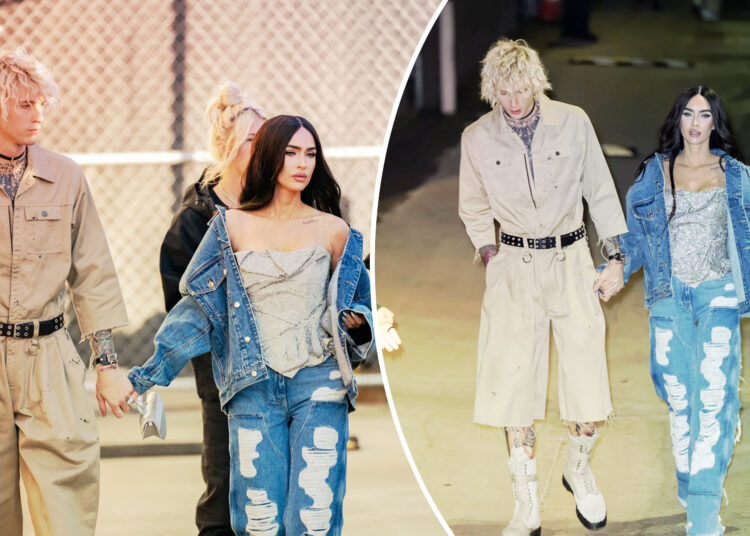 Megan Denise Fox is an American Actress who started her acting career with her debut in the family film Holiday in the Sun which was released in 2001.

Megan Fox has received many awards and recognitions for her acting skills, which include four Teen Choice Awards and two Scream Awards.

Machine Gun Kelly whose real name is Colson Baker is an American rapper, singer, songwriter, and actor. He is known for his genre duality across an alternative rock with hip hop.

His debut album Lace up was his breakthrough and the single that had blown up and given him all the initial recognition that he deserved and which peaked at number four on the US Billboard 200 was  “Wild Boy”.

He has plenty of awards and nominations, including two American Music Awards, iHeartRadio Music awards, and so on.

Here you can have a look at the Pictures of Megan Fox and Machine Gun Kelly from Jimmy Kimmel Live.

Megan Fox was seen wearing a Denim outfit. She wore Denim flared long jeans with a Denim jacket pulled down to her shoulders and a folded gray tube top with a silver bag.

Meanwhile, Machine Gun Kelly wore an intriguing tan jumpsuit with frayed sleeves and baggy pant legs that were short at his knees.

In January 2022 this year the duo announced that they are engaged via an Instagram video to Their fans.

Megan, The Transformers star, mentioned in her post that she and Machine Gun Kelly drank each other’s blood to celebrate their engagement, which took place outside the Spa Botánico at the Ritz-Carlton Dorado Beach in Puerto Rico