Albania gave its citizenship to the pop star Dua Lipa on its Independence Day. 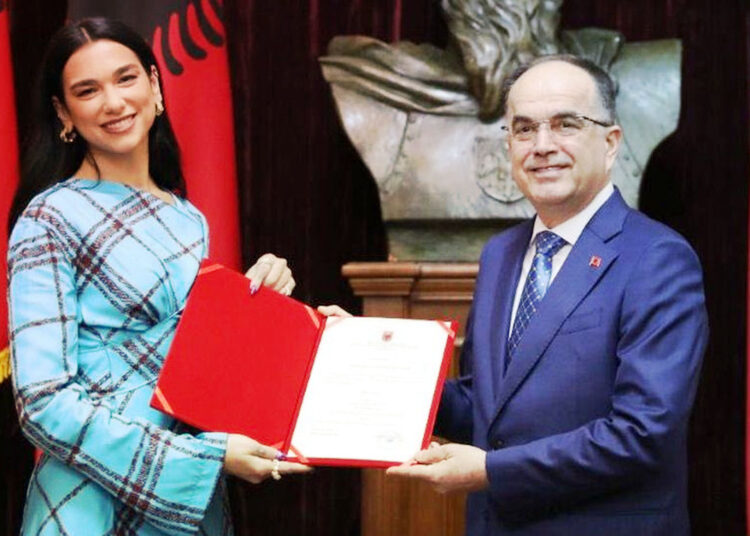 Dua Lipa, the famous pop star is famous for two things, her music, of course, and for spreading awareness regarding various causes. She’s one of those stars who take their high-rise position in society as a duty to spread awareness among humanity.

Pretty recently, Dua Lipa was granted Albanian citizenship. How did this happen? What is the story behind this? Let’s find out.

Dua Lipa has been spreading awareness of the country through her music. She has taken her position as a pop icon to spread the word regarding Albania’s issues.

Dua’s parents are from Albania as well. They had to leave their country because of the war that happened in Bosnia. They gave birth to Dua in London in 1995.

After finishing Primary school, Dua and her family returned to Albania. She did her schooling there but pretty soon, went back to the UK to pursue her dream of singing, which definitely didn’t fail.

Story Behind the Citizenship

After seeing Dua Lipa’s pure efforts in telling the story of Albania to the world, the country thanked her by giving her Albanian citizenship, something that she definitely deserves.

Dua tweeted 4 photographs in which she seems pretty excited and cheery after getting her Albanian citizenship. She’s holding a red-colored folder with the Albanian flag on it. Dua can be seen wearing the color that contrasts best with red, that is blue.

In the caption, Dua wrote,

“Thank you President Bajram Begaj and Mayor @erionveliaj for this honour ~ got my Albanian citizenship!! ~ faleminderit, po ndihem shume krenare”

She thanked the Albanian president Bajram Begaj for the citizenship and announced it later in the caption. She even wrote a few words in Albanian, “faleminderit, po ndihem shume krenare”. The sentence translates to, “Thank you, I’m feeling very proud.”

Dua also co-founded the ‘Sunny Hill Foundation’ with her father in the year 2016. The purpose of the foundation is to raise funds from the annual concerts that are held in Kosovo to aid impoverished people.

In an interview with NPR, Dua talked about her relationship with Albania. She said,

“Something that people forget all the time is, people don’t really want to leave their country unless they really have to. It’s really out of necessity.”