The veteran tv actress is Hina Khan known for her love of traveling and is currently having the time of her life in Turkey. 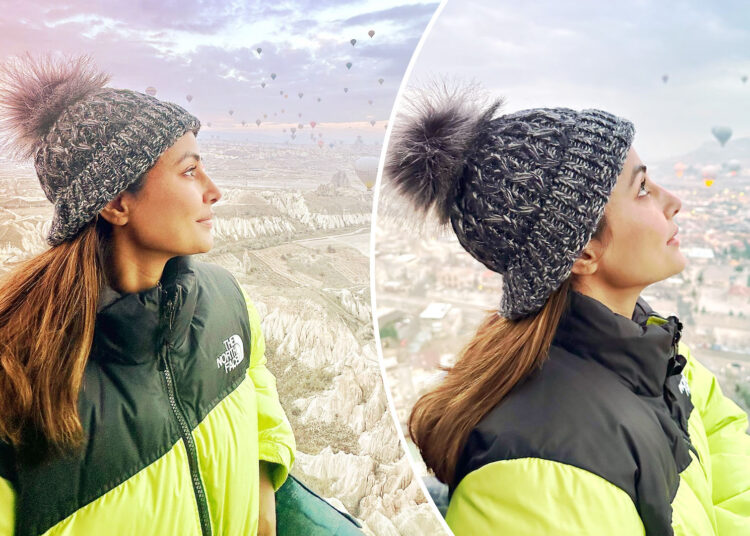 Hina Khan is one actress who absolutely loves traveling, this year she has traveled across three different countries and now that the year is about to end, Hina decided to visit one of the most beautiful countries in the world, Turkey.

Hina is an absolute travelholic and her 18.7 million followers on Instagram know that very well as keeps posting updates whenever she visits a country, and for the past few days, she has been dumping some really amazing photos from different cities of Turkey on her IG.

In a recent post shared by Hina Khan, the beautiful diva can be seen enjoying an amazing view of the mountains of Cappadocia, hot hair balloons can be seen in the background and Hina checked her bucket list this time as she mentioned about it in the caption.

Here you can have a look at some pictures of Hina Khan from her vacations in Turkey.

Hina was wearing a black & parrot-green The North Face bomber and a grey cap which made her look adorable.

Hina is also dropping some adorable IG reels which fans are absolutely loving, her reels are fetching millions of views these days.

The diva had a pretty long career in the entertainment industry and she has worked in different tv serials for the most part of it, now it seems like Hina has decided to enjoy a few years by ticking her bucket list.

That’s about her personal front, while on the work front, Hina last made her appearance in Big Boss 14 and 15, she has been doing music albums these days, besides that Hina is in production these days, she produced a movie titled Lines last year.

Hina is planning to co-produce a movie next year and it is titled Country of Blind, she will also be acting in the movie, however more details regarding the movie are yet to be released, but its shooting will start early next year.