Thanksgiving made special for the Barker family as Landon Barker given tribute to his stepmom Kourtney Kardashian! 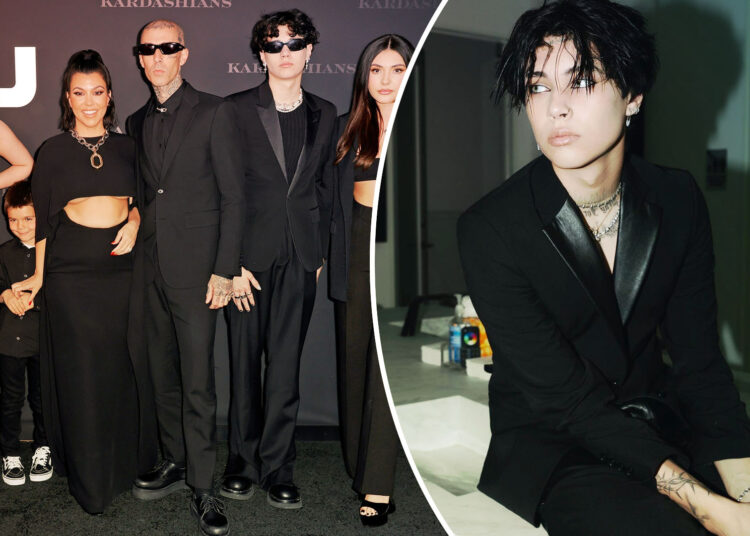 Landon Barker, The Son Of Travis Barker Gave Tribute To His Stepmom Kourtney Kardashian! We have seen a lot of modern families in Hollywood with modern sentiments and emotions. But when it comes to the so-called definition of modern then it is not just related to being casual but also very emotionally bound.

Something like this has been seen with many couples and families of Hollywood celebrities where children are accepting the partner of their divorce parents or separated parents.

Landon has recently proved that his relationship with his stepmother is nothing less than a real son-and-mother relationship. It was in this year when Kourtney Kardashian got married to Travis in April 2022. Following this wedding, Landon totally accepted her in the family and gave tribute to her on 25 November 2022.

Here you can check out some pictures of Landon Barker, with his Father Travis Barker, and Stepmother Kourtney Kardashian.

It was related to the Thanksgiving tribute that happened with a fabulous photo of himself with his family including his father and Kourtney Kardashian with other siblings. In the message, he has written he feels so thankful for her and his family and later on confessed that he loves them.

He has also added an Instagram story related to the same thing by saying “I love you and I am so thankful for you every day.”

Apart from Landon, Travis Barker is also a father of Alabama who is 16 years old. Coming to Kourtney Kardashian then she also has three kids which she shares with Scott.

Here you can check out some pictures of Landon with his Girlfriend Chali D’ Amelio.

It was recently when Landon made news with his serious girlfriend Charli D’ Amelio. The couple recently celebrated a big winning by dancing with stars win. His girlfriend has taken the price of the first position while getting the support of not just Travis but also Kourtney Kardashian. She has recently revealed how she feels about this couple and said:

“Travis and Kourtney, I’ve told them about it, and they were super excited as well. I think overall, it’s just going to be really fun. I have a very great group around me. Landon’s awesome, so I’m glad he’s going to be there supporting me.”

The couple went public with their romance in June 2022. It was revealed that Landon has a crush on Charli for some time before they met in reality. Things are new between them as they started dating each other at a very young age but at the same time, they are mature enough to take things at slow while having strong feelings for each other.