Here are Angelina Jolie's top movies, which range from historical dramas to animated blockbusters to cult favorites and much more. 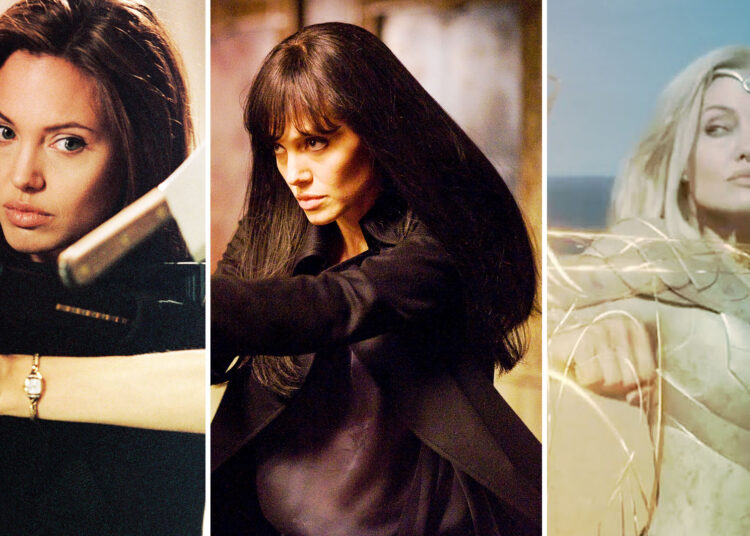 Angelina Jolie is a well-known actress who has won numerous awards, and she also serves as the UN Goodwill Ambassador. She rose to stardom quickly as an American supermodel.

One of the most beautiful and skilled actresses to ever grace the big screen is Angelina Jolie. Here are Angelina Jolie’s top movies, which range from historical dramas to animated blockbusters to cult favorites and much more.

Since her debut in 1982, Angelina Jolie has racked up over 60 credits on both the big and small screens, establishing herself as one of the most gifted and versatile actresses of the last 30 years.

Therefore, we will talk about the “Top 10 Angelina Jolie Movies” in this article. So, if you are a fan of Angelina Jolie and want to learn about some of her best movies, read this piece all the way through to the end.

The list of the top 10 Angelina Jolie Movies is listed below. Look at each of them individually:

Maleficent is an American fantasy film that was released in 2014 and directed by Robert Stromberg. The screenplay for the film was written by Linda Woolverton.

The plot centers on the titular fairy who, after cursing the king’s daughter, Aurora (Elle Fanning), with a spiteful curse, discovers that Aurora might hold the secret to her own redemption.

The movie garnered mixed reviews from critics, with an appreciation for Angelina Jolie’s acting, the costumes, the special effects, and the music score.

The crime thriller film Hackers was released in the United States in 1995 and was directed by Iain Softley. The movie centers on a bunch of high school hackers who participate in a corporate extortion scheme.

It was created in the middle of the 1990s when the public was only beginning to become familiar with the Internet, and it represents the principles outlined in the Hacker Manifesto. On release, the movie did poorly at the box office and garnered mixed reviews from reviewers, but it has since grown to become a cult favorite.

The 2010 American action thriller Salt was written by Kurt Wimmer and directed by Phillip Noyce. Jolie makes a fantastic double agent in the movie Salt, thanks to her distinctive facial features and capacity for projecting a chilly demeanor.

Although the movie only received a 6.4 rating on IMDb, the plot is quite thrilling. Jolie portrayed the role of the CIA agent Evelyn Salt in the movie. Salt made $294 million at the global box office and earned mostly favorable reviews.

The  American action comedy Mr. & Mrs. Smith was released in 2005 and was directed by Doug Liman and scripted by Simon Kinberg.

In the movie, Brad Pitt and Angelina Jolie play a bored upper-middle-class married couple who are shocked to discover that they are assassins working for opposing agencies who have been given the mission to kill each other. Mr. & Mrs. Smith established Pitt and Jolie’s personal relationship in addition to being a box office success.

Changeling, a horrific mystery about Christine Collins, a lady looking for her missing 9-year-old son in 1929 Los Angeles, is one of the great Clint Eastwood’s most underrated movies.

Jolie provides one of her most compelling yet quiet performances in this movie. Christine takes on the establishment while simultaneously beginning her own inquiry after the L.A.P.D. locates and returns to her an imposter who has an appearance that is identical to that of her son.

Based on the same-named Marvel Comics race, the superhero movie Eternals from 2021 features an American cast. Jolie plays a supporting role in a larger ensemble, but her performance as the superhuman Thena leaves a lasting impact.

The movie tells the narrative of the creation of Eternals and how these enigmatic immortals went on to influence the development of civilization.

A 1998 American biographical drama television film titled Gia follows the lives and times of Gia Carangi, one of the first supermodels.

Along with Mercedes Ruehl and Elizabeth Mitchell, the movie stars Faye Dunaway as Wilhelmina Cooper and Angelina Jolie as Gia.

Michael Cristofer was the director, while Cristofer and Jay McInerney wrote the script. Terence Blanchard was responsible for the original music score. The reviews for Gia were mostly positive.

Foxfire is a riveting story of friendship, rebellion, and the ramifications of four friends who come together to fight their s*xual harassment.

Angelina Jolie plays one of her best parts in this film, which is also one of her most undervalued. Legs Sadovsky, a shadowy vagabond played by Jolie, inspires four young girls to rebel against their harsh instructor.

In Kung Fu Panda 2, which follows Po’s valiant adventures, Jolie reprises her voice as Tigress. Jolie has ideally cast as a fierce cat with a sensitive touch thanks to breathtaking visuals and slapstick humor.

In her movies, Angelina Jolie is renowned for her outstanding portrayals of rebellious, aggressive characters. In Gone in 60 Seconds, Nicholas Cage co-starred in a character of this type.

Even though the action heist movie earned mixed reviews, Jolie nevertheless gave a strong performance. The story film revolves around a gang of car thieves, one of whom is played by Angelina Jolie in the role of Sara “Sway” Wayland.