Gillian Anderson has recently starred in the Netflix Film, The Pale Blue Eye. 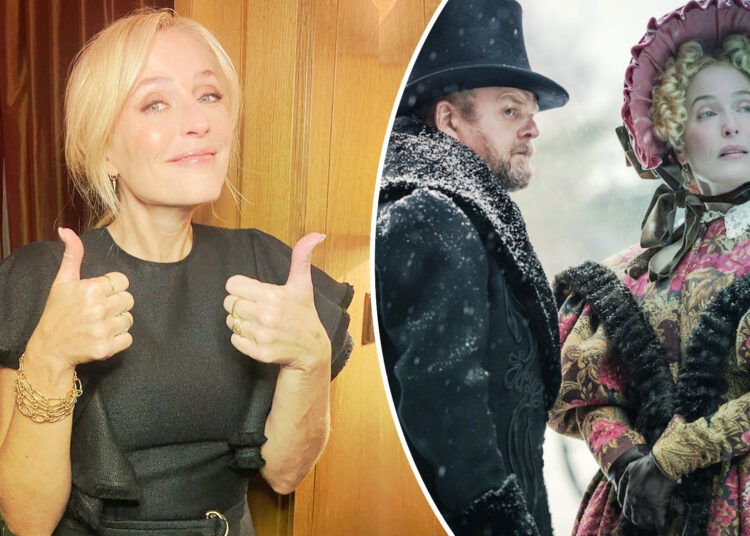 Gillian Anderson posted about her night at the screening and Q&A for the Netflix film The Pale Blue Eye!

Gillian Anderson is an American Actress who is known for her roles as SBI agent Dana Scully in her film The  X-files recently she is popular for her role as Jane Milburn, Otis’s mother and s*x therapist in the Netflix teen series Sex Education and as the British Prime Minister, Margaret Thatcher in the fourth season of The Crown.

The plot is set in 1830, when a Veteran Detective goes in search to solve the mystery of murders at the United States Military Academy, West Point, New york.

Also Read: The Pale Blue Eye Release Date, and Everything About the Upcoming Horror Mystery Movie

Gillian Anderson At the Special Screening of The Pale Blue and Q&A.

In the recent posts by Gillian Anderson, she is seen at the event of the screening and Q&A of her new film which is all set to release on 6th January, in London, United Kingdom. She is seen wearing a black long dress. Her hair is tied in a casual ponytail. She is also wearing Gold earrings, rings, and bracelets.

She posted the pictures with the caption, “About Last night” and tagged everyone who made her look this stunning and flawless. Her Hair is all done fantastically by professional hairstylist, James Rowe.

Her outfit is from Chloe and her shoes are from Jimmy Choo. She is dolled up by Professional makeup artist, Florie White. Her styling looked gorgeous and was done by professional fashion stylist Martha Ward.

The comments on her recent posts show how much her audience remains excited about her new film and for her posts in general.

Many people have commented about their concern about whether her character dies in the movie. The audience really loves her. With 2.5 million followers on Instagram, Gillian Anderson is one of the most famous