North West Was Seen Doing Make-up Of Her Aunt Kylie Jenner In A New Tiktok Video!

North West was seen doing makeup of none other than her aunt Kylie Jenner! 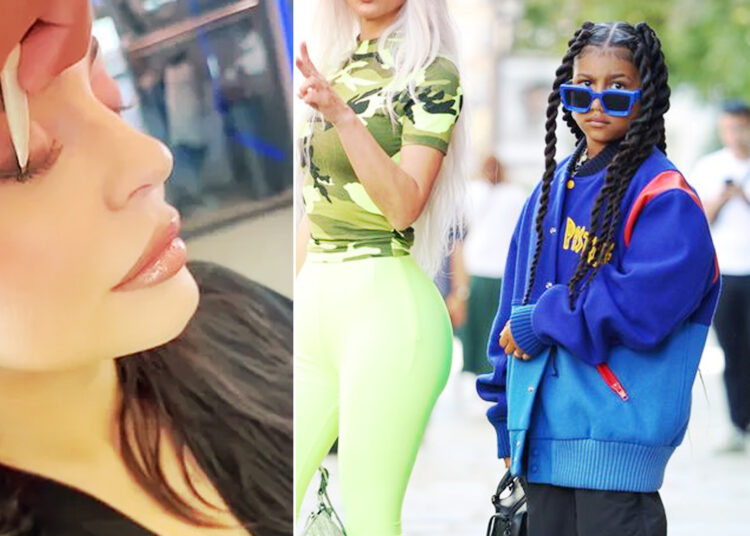 Whether it is related to the fashion sense they carry or the human then everything comes from the way they have grown up. Something like this has happened with North West following the footstep of a mother who was seen doing make-up for her aunt Kylie Jenner.

The 9-year-old star kid North West has recently turned into a makeup artist for her aunty Kylie Jenner. She is already on her way to becoming a great artist as she has shared a Tik Tok video from the account of her mother Kim Kardashian.

North West doing a makeover of her 25-year-old aunty Kylie Jenner on 22 November 2022. In the caption, she has written about doing the makeup of Kylie Jenner.

The video was of 48 seconds during which one can easily see Kylie Jenner sitting patiently and letting her niece do all the makeup. She was wearing a silver heart earring and her hair was wet.

Here you can check out some pictures of North West Doing Make-up of Kylie Jenner.

The hand of North West was visible as she was applying the makeup that started from the base and ended on the liner. She used almost every form of makeup whether it is concealer or lipstick or eyeshadow. She also has a young assistant who joined her.

In the end, Kylie Jenner removed her headband and came in front of the camera with full face makeup. The video has already reached millions of like within a few hours of its uploading.

It is not the first time when North West was seen doing makeup. She is definitely a talented child whose painting skills were also appreciated and the same is going for her makeup skills. But at the same time, this makeup skill has brought a lot of trouble in her family, especially between her parent that is Kim Kardashian and Kanye West.

Kanye West already came in front of people through social media where he showed his dislike towards the makeup which is done on or done by his daughter. He doesn’t want her to come in this line at least for the coming years. But when it comes to the mother then she is totally happy and proud of her.

Kim Kardashian has revealed: “She’s actually so good that I rented a house this summer … and she decided not only to prank me and do the makeup on her and Chicago, but she made the whole room look like a murder scene.”

The mother also revealed how the housekeeper came and try to take authorities as if a real murder scene has happened.