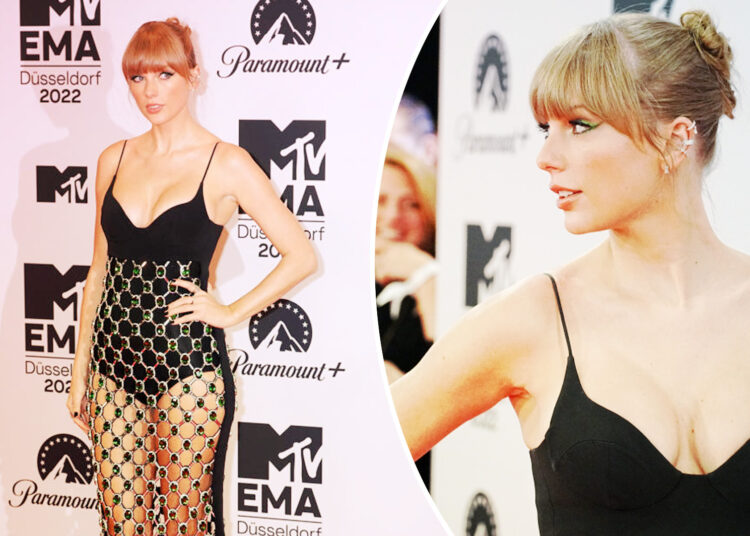 If we talk about any recent award function then MTV Europe Music Award has recently happened and a lot of celebrities appeared on the red carpet.

Among them is the beautiful Taylor Swift who was seen dazzling in sheer bejewel just before winning the Best Video and Artist Award.

Taylor Swift was recently seen on the Europe Music Award having the best of her fashion. She has kept her fans in shock on the red carpet. She surprised fans with the appearance that happened on 13 November 2022 which was held in Germany.

At first, it was not announced whether the singer is going to be there on the red carpet however, her sudden appearance got a lot of appreciation.

Here you can check out some pictures of Taylor Swift from the MTV EMAs.

Coming to her look then Taylor Swift was looking beautiful as ever in a sheer skirt, full of jewelry and a black body suit. With almost no accessories the singer arrived with high heels and her confidence.

Her blond hair has become the attraction that was tied up in a bun. Coming to her signature red lipstick then it was missing however, she went with a simple pink one.

Taylor Swift surprised appearance shocked a lot of people. It was just a few days ago when she appeared on the stage and performed in Exile with the band. This song was from her 2020 Studio album that featured Bon.

Coming to her recent event then Taylor Swift has recently announced another world tour that is going to happen in 2023. Almost every tour of Taylor Swift has got a lot of attention and the same will happen in this one. According to Taylor Swift, she is planning this for ages and has finally is ready to announce that she is back on tour.

She has also explained that the tour would be named The Era Tour as it is a journey of all her musical Eras that happened in her career. This will start in the US in stadiums and coming to the dates then it will be announced soon. Coming to the acts, Taylor Swift has already started planning them and rehearsals are also going on that way.