BTS Jin Performs Live with Coldplay for the Album “The Astronaut.”

BTS's Jin shared stage with Coldplay during Music Of The Spheres concert in Argentina. 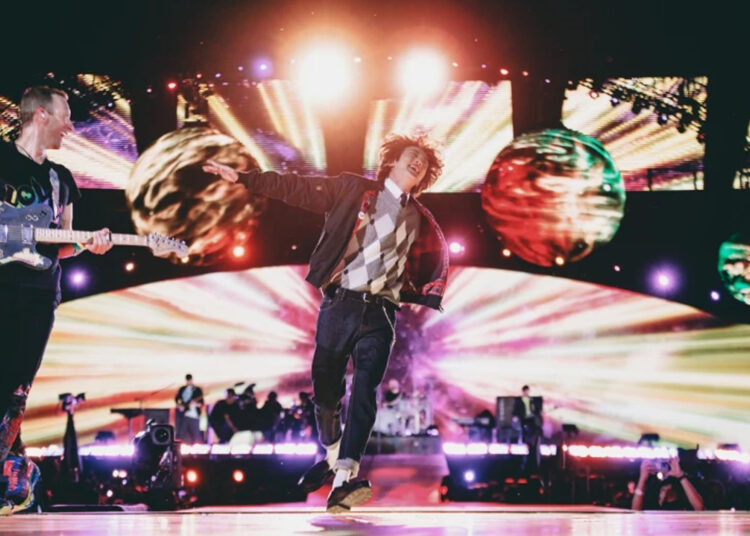 BTS’s Jin performed his last stage show before going for military enlistment. The South Korean singer and songwriter Kim Seok Jin, famously known as Jin is one of the members of the famous boy band BTS.

At Coldplay’s “Music of the Spheres” concert in Buenos Aires, Argentina, on October 28 local time, Jin made a special appearance. He joined the band to perform “The Astronaut” live for the first time.

The performance was later on uploaded on YouTube by Bangtan Tv. It was also streamed live in 3500 movie theaters in more than 80 countries. The single “The Astronaut” was co-written by Coldplay and Jin. The fans were eagerly waiting for this show for a long period of time and when the show was performed it was a houseful one.

Before the performance began Chris Martin, Coldplay’s frontman shared a small speech talking about the song and BTS. He said, “And one thing that has truly enriched my life, as well as our band’s life, is that about two years ago, someone recommended that we collaborate with a Korean boy band.

Being human, my initial response is frequently judged, so I was full of it. However, after some time I thought, “Why do I feel worried about something just because they’re different? ” We then continued on this path and created the song “My Universe” as a group.

Here you can check out BTS Jin Performs Live with Coldplay.

And it’s turned out to be one of the most enjoyable and rewarding relationships we have as a band.” He further continued, “So, approximately six months ago, one of their members called me and announced: “I have to leave the band in December [to join] the army in Korea because that’s the law there.

And he declared, “I need a song that briefly bids everyone farewell and conveys my affection to them… So I responded, “Okay, let’s record a song together.” And rather than worrying about it, I am incredibly enthusiastic about it and thankful for our partnership with BTS.

The song is one of the successful performances of Jin. It has added another star to his clouds of success. Jin’s collaboration with BTS on three solo songs, “Awake,” “Epiphany,” and “Moon,” have achieved success on the Gaon Digital Chart in South Korea.

Together with his bandmates, he received the fifth-class Hwagwan Order of Cultural Merit from the President of South Korea in 2018 for their contributions to Korean culture.