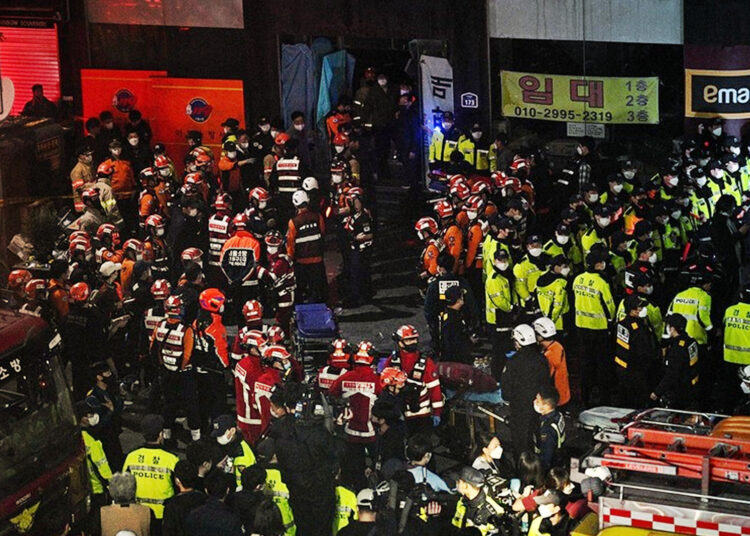 Keeping in mind the incident that happened in Itaewon, the events and shows have been canceled. The morning after the incident, on October 30 KST, President Yoon Seok Yeol held a press conference at the Yongsan Presidential Office.

He announced an urgent public discussion regarding the Itaewon tragedy and proclaimed a period of national mourning, beginning that day and lasting until November 5.

In response to the decision taken by President Yoon Seok Yeol, the Korean entertainment industry has been postponing the programs. SM Entertainment which was going to organize the Halloween party and red carpet has canceled its program.

The South Korean girl group IRRIS has also postponed the release of their upcoming single album. In light of the period of national grief the release of the single “Stay With Me,” which was scheduled for October 31 at noon, has been postponed, according to their management company Justice Records.

The release of BTS’s Jin lyrical video along with the listening party has been postponed. The agency confirmed the news by announcing it on Twitter.

The 2022 Busan One Asia Festival which was going to be held on October 30 has also been canceled. They officially released information stating, “A period of national mourning which was declared due to the tragic incident in Itaewon.

We inform you that the Busan One Asia Festival K-pop concert, which was scheduled to happen in Busan tonight at 7 pm KST has been canceled.”

The press conference for KBS2’s upcoming drama “Curtain Call,” which was initially set for October 31 at 2 p.m. KST has been postponed. The upcoming solo comeback “Last Scene” by EXO’s Chen has also been postponed.

Additionally, broadcasters including KBS, MBC, SBS, JTBC, and others have canceled their regular programming in order to carry news updates all day long.